by Ilanakowarski
August 24, 2009Filed under: 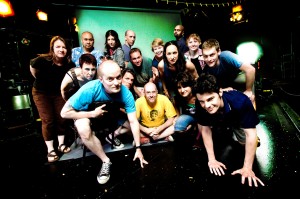 Neo-Futurist ensemble member Kristie Vuocolo quipped, “Things are gonna change around here now that Walters is in charge. He’s the artistic director for the people!”  An ensemble member for seven years, Ryan Walters has earned the respect of his peers after performing in many productions and writing two critically acclaimed shows (“Daredevils” and “Picked Up”).  The Neos have just elected him as their artistic director, after current artistic director Jay Torrence announced that he would be stepping down from his position to go to graduate school for creative writing. But Walters assures those who love the Neos that he won’t change the things that make the Neos special.

Best known for their twenty-years-and-counting run of “Too Much Light Makes the Baby Go Blind,” the Neo-Futurists have made a name for themselves by creating a distinctive brand of theater in which there is no “fourth wall” between the audience and the actors. It is this kind of “honesty” which Walters believes has made the Neos “one of the most exciting theater companies out there” and that special quality is something Walters promises to preserve.

Walters suggests that, in most plays and comedy routines, artists derive their inspiration from “a moment of truth” or an honest feeling and then convert into something artificial and fictional to make a play. Walters argues that artists should be more direct with their audiences, and be frank about where they are coming from and what they are doing. What makes the Neos distinct, Walters declares, is that ensemble members write and act their plays as themselves so that “the honesty that comedy comes from is admitted to the audience” and he says this creates a unique connection between the audience and the actors.

Stressing continuity, Walters explains that he does not plan to radically change the company, and that he sees himself as “a facilitator” rather than a dictator. An ensemble member himself, Walters hopes to make the ensemble stronger from within, rather than imposing his own vision on the company.

According to Torrence, Walters’ conception of his role is consistent with the democratic philosophy of Neo-Futurism. The Neos make most important decisions through discussion and consensus and—within this system—the Neo’s artistic director has limited power. Torrence emphasizes, “What the artistic director does is lead the group’s vision…”

Walters defines his mission very broadly, as making the company the best it can be, but refuses to decide exactly what that will mean. Beyond saying that he wants to make sure that the plays are “creative and challenging,” that the audience grows and that the ensemble is “strong,” Walters balks at the suggestion that he narrow his focus. This, according to Torrence, is one of the things that makes Walters a good leader for the Neo-Futurists. Because he does not impose his own personal tastes on the company, Walters has what Torrence calls “an openness to exploring” that produces interesting, innovative theater. According to Torrence, openness is very important for a free-spirited group like the Neo-Futurists. “We’re always trying to top ourselves, and we’re getting more and more ambitious with our projects,” Torrence explains.

Walters vows to nurture the funkiness and individuality which he believes makes the Neos great. By creating a “bubble of safety and trust,” Walters plans to promote creativity by “taking care of artists” and welcoming new ideas, creating a community that is “involved and invested” by “developing good relationships.” He wants to continue producing the oddball plays that the Neos are known for, plays like the musical-theater puppet show “Beer” the Neos are perfoming at the Great American Beer Festival. Ultimately, Walters thinks that his top priority should be in producing good work, since “the work is what brings everyone together and the work is what keeps us going.”

With plans to improve the theater space and to produce bigger and better plays, Walters promises that this will be an exciting new season. Walters implores that “everybody should see the shows” because they will be both entertaining and “relevant,”  helping people deal with real-world problems by laughing at them. “Some issues are so huge that they just seem so impossible that you don’t know how to start dealing with them, but laughter releases stress, and helps you get to a place where you don’t feel so crappy.”