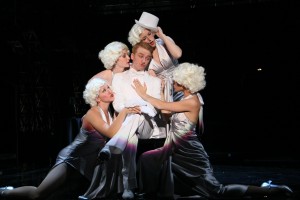 Jim Corti has had a long association with “Cabaret,” as Joel Grey’s understudy and then taking over for Grey as the Emcee for the national tour of the Hal Prince Broadway revival of the show, and also having worked with Bob Fosse, who directed the movie version.  Both of those versions added new material so how refreshing to see that as director and choreographer of this often misunderstood show at Drury Lane Oakbrook, Corti has gone back to basics.  Fosse, of course, turned an ensemble show into a diva vehicle, and even got Kander and Ebb to write a new song for Liza Minnelli, “Maybe This Time,” which most stagings begrudgingly include.  It’s a great song, but it makes the character of Sally Bowles larger than life, a repressed diva.  Not this time: Zarah Mahler plays Sally as an ordinary girl with lots of dreams who wears her heart on her sleeve.  Yes, she’s charming and talented, but not too talented.  She can sing and dance, to be sure, but those are just two more weapons in her men-pleasing arsenal rather than what she is fundamentally about. In its original form, the show makes clear that none of Sally’s dreams are even in the ballpark of reality, and that ideal is refreshingly restored here. No less engaging is Patrick Andrews’ Emcee, a role so associated with Joel Grey that performers are often apt to simply mimic him; not so for Andrews, who makes an entirely new and refreshing statement by foregoing the customary “wink and a nod” approach, making his oddities all the more odd by appearing more or less normal the rest of the time. Ah yes, then there’s the Nazis. We always know they are coming—this is 1930 Berlin, after all—but their emerging presence is never telegraphed. Thus, when we do see the rats come out of hiding, as it were, we experience it all with the same respective surprise, disgust or even indifference that the lead characters do. Particularly effective is having Clifford Bradshaw (Jim Weitzer) begin his train trip before “Wilkommen” and end there as well, with characters sitting around watching the proceedings in the Cabaret itself in a dreamlike state that gradually gives way to a nightmare as the Nazis gradually become more visible and their voices more resounding by their contemporaries remaining silent.  (Dennis Polkow)