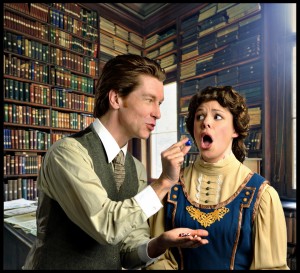 In the Greek myth of Pygmalion and Galatea, a sculptor falls in love with a statue he has created, i.e., the “creator” falling in love with his “creation,” a plot point central to the morale of the tale.  By updating the legend to Victorian England and freely adapting it into a social satire on class distinctions in his 1913 play “Pygmalion,” George Bernard Shaw made sure that phonetics professor Henry Higgins and common flower-girl Eliza Doolittle were close enough in age so that at least the potential of a love interest between them becomes plausible, even if, like the myth itself, such a love can never be consummated.  Giving into pressure from Hollywood when a 1938 film version was made, Shaw allowed a more ambiguous ending which also became the template for 1956’s “My Fair Lady,” the Lerner and Loewe musicalization of Shaw’s play, the creation of which Shaw did not live to see.

By casting a near-fifty Rex Harrison and a nineteen-year old Julie Andrews in the lead roles on Broadway, the expectation was cemented for a huge age chasm between the characters, a pattern perpetuated by the fact that Harrison went on to star in—and win a Best Actor Oscar for—the 1964 film version pushing sixty with an Audrey Hepburn still in her mid-thirties, and that Harrison would also revive the role on stage well into his late seventies with co-stars often still in their twenties.

Kudos to Light Opera Works and director Rudy Hogenmiller for daring to break that longstanding mold and stage “My Fair Lady” with leads close enough in age to restore the original intention of a plausible attraction between Higgins and Doolittle.  Making his LOT debut, Nick Sandys makes a dashing Higgins and his youthfulness gives the character’s arrogance and detachment a delightful dash of immaturity.  And who could have guessed, having watched Sandys’ performances and fight choreography around town, that the guy could sing as well?  True, the score was written sprechstimme for Harrison to “talk-sing,” but there are enchanting melodic lines there and Sandys’ punchy rhythms really bring out the lyrics, often taken word for word from Shaw.  This was a daring casting move that pays off splendidly, and Sandys makes the ideal foil for soprano Natalie Ford’s Eliza, who not only brings the best out of such songs as “Wouldn’t It Be Loverly” and “I Could Have Danced All Night,” but sexual sparks fly between the duo at every stage of their relationship.  With a full orchestra, chorus and dance troupe and superb performers in even the smallest roles, this is the fairest “Lady” seen in an area production in a long, long while.  (Dennis Polkow)