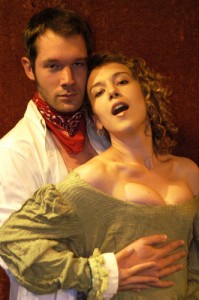 It has the makings of an interesting and substantial sketch: a self-described parody of a Harlequin Romance novel set in Pecos, Texas,   with a PTSD-inflicted leading man suffering from unpredictable war flashbacks (usually in the midst of sexually charged moments), and comic relief in the form of a dead horse stuck in a tool shed. But the first weekend into its run, the show is more awkward than satirical, dragging through a long ninety minutes, which does get tighter as the evening goes on. Acting is inconsistent, with seemingly improvised screaming and long silences breaking up otherwise well-timed wooing and fighting. Director Karisa Bruin has a great eye for theatrical cliche (and makes smart use of lights and sound to signify flashbacks and magnetic romantic attraction), but the show revels in each farcical moment a bit too long—it feels like a workshop with a great amount of potential in need of heavy editing, especially cheap laughs in the form of simulated sex and nipple jokes. (Monica Westin)