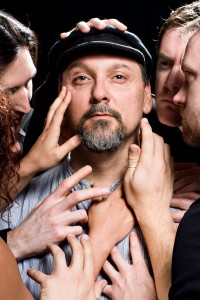 Radio plays are notoriously awkward to stage (see last year’s production of “Radio Macbeth” at the Court), and Dylan Thomas’ play for voices is a particularly tricky one, intricately lyrical, at times farcical as well as deeply sentimental as it takes on a day in the life of a fictional Welsh town. Caffeine Theater’s production is an imperfect but indisputable triumph. First and foremost, the acting is tremendous, each ensemble member taking on at least four wildly different characters, often changing personae on a dime and with simple but effective costume modifications and astute physicality. The show is well-paced and the story clear where it could have easily become incomprehensible, and director Paul S. Holmquist deftly pulls out incredible comic moments, such as an unforgettably acerbic dinner scene in which a long-suffering husband reads a book about poisoners while displaying perfect manners to his goading wife. But the true greatness of this production lies in its ability to stage the radio play without losing its focus on voices. The range and depth of the use of voice onstage is breathtaking, the chorus of actors representing everything from steam kettles to farm animals to a house full of clocks without missing a beat. (Monica Westin)