by Monica Westin
September 1, 2009Filed under: 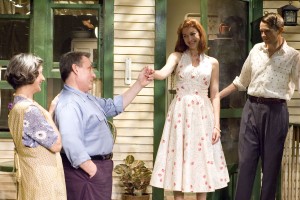 A substantial, convincing production of a timely Arthur Miller play about wartime profiteering, denial and, of course, the Lost American Dream. “I just want something I can give myself to,” the play’s naif tells his father, in a line that encapsulates the play’s  tense web of desire, thwarted with bleak modernism that’s peppered with real insights into human psychology. Director Kimberly Senior pulls out remarkably strong performances, with Janet Ulrich Brooks in a standout role as a grieving mother. The show hits all the right notes, from banter to melodrama, effectively teasing out the play’s subtle and off-kilter comedy, through creative use of mumblings and echoings, that could have been lost in a more constrained production. Visually, it’s at times surrealistically television-like, with a fairly corny, astroturfed set straight out of a sitcom backyard, and the acting often feels very TV-influenced. Yet this element adds to the production, embedding its “sins of the fathers” heaviness and explorations of the limitations of knowledge into a claustrophobically mediated way of being in the world. (Monica Westin)