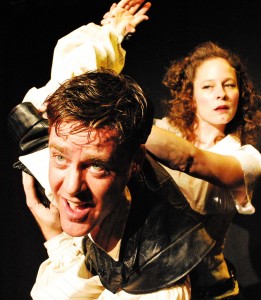 With its seemingly sexist message, “The Taming of the Shrew” remains one of the most problematic plays in the Shakespeare canon for a modern audience.  On its surface, it appears to suggest that wives are simply to be submissive to their husbands, although as always with Shakespeare, there are deeper meanings.  Many of us view Katherina’s initial “shrew”-like behavior as a lack of love in her life, an inability or even unwillingness to love anyone around her (those early scenes where she is abusive to family members are key), including herself.  By meeting Petruchio, a would-be husband who can match her abuse, the effect of her own is neutralized.  Along the way, both discover that they are in love, and part of love is doing what someone else wants, not simply what you want. Her public speech of submissiveness at the end of the play is not so much that her spirit has been broken, so much as she has found herself; she is now a person capable of caring for another and being responsive to his needs, not only her own.

The more chemistry that there is between the couple, the more effectively this message can be communicated, and Jenny Lamb’s Katherina and Jeremy Van Meter’s Petruchio are able to spark off of one another considerably in director Nick Minas’ Theo Ubique production. So much so, in fact, that some of the initial “taming” looks more like a spirited S&M session, given the vigor with which each seems to enjoy besting and beating one another.  Both are portrayed as biker types, Petruchio with leather vest and boots and a black muscle t-shirt, Katherina with chains and spiked bracelets.  The physical interplay between them is matched flip for flip, headlock for headlock; it is only  psychologically where Katherina ends up falling short.

What surrounds them is a vaudeville-like carnival atmosphere that often seeks to blunt the issues of the play, such as having the bride’s father Baptista be buffoonishly played by a woman (Cheryl Roy)—complete with Groucho-like painted-on beard and moustache—and having the bride’s sister Bianca be wispily played by a male (Matthew Sherbach) as he/she is courted.  Also bizarre is the decision to include a handful of original songs by Ethan Deppe, often interpolations at odds with Shakespeare’s text, such as having Katherina and Petruchio each grab guitars at show’s end and sing a duet of “I won the wager, doo-wop,” i.e., what has transpired is all a joke that both are in on.  The songs also are awkwardly placed, tending to grind the action to a halt, inevitably inviting an immensely unflattering comparison to another musical adaptation of this show, namely Cole Porter’s flawless “Kiss Me, Kate.”

The most inspired decision, however, is to use the Rogers Park storefront window of the No Exit Café as a backdrop where the audience can see the el tracks, the cars parked on the street, and most fascinatingly, the pedestrians who happen by, many of whom stop and watch the show in progress, spontaneously participating as they do in ways that the performers themselves improvisingly acknowledge and which by far, are the most memorable moments of the show.  (Dennis Polkow)