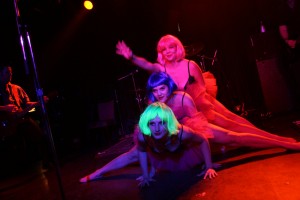 Sultry striptease and karaoke are what this unique burlesque show is about tonight at the U.S. Beer Company. The audience cheers as the hosts and dancers appear on stage one-by-one, ready to shed their costumes.

But there’s more to burlesque, or the “classic striptease,” than what many think. American burlesque in the early twentieth century combined satire and social commentary with performance and of course, striptease. However, solo performer and producer for Flesh Tones Burlesque, Cathy “Maiden Sacrifice” Russell, says as it’s become more popular, it’s become difficult to find that style anymore.

“As it’s gotten bigger, people who don’t have quite the education yet as to the history and what it’s typically been about, why it’s important in our dance history and what that meant socially,” Russell says. “It’s really gone back to basics. It’s gotten a little conservative.”

Russell says two of the very basic types of burlesque, among the other varieties, are Revue and Guerilla. Revue focuses on highly choreographed pieces. “They give you what you think is pretty,” she says.

“We tell you what we think is pretty,” she says.

Russell says she focuses more on storytelling than dancing. “My choreography doesn’t need spins and twirls and big kicks…there are performers that have dance history and those that don’t work really hard to get there and others bring different aspects to their performance.”

Amber Dawn, a.k.a. Oosha Boom, is also a burlesque performer and producer who came to Chicago from New Orleans in 2005 after Hurricane Katrina, making her Chicago debut with the Hellcat Hussies. One of her first performances in town was a commentary comparing George W. Bush with Hitler. At the end of the dance, she removed her top to reveal “Fire Bush” written across her chest. Both her mother and grandmother were burlesque performers—making it, she says, a family business.

“Chicago is hit-and-miss,” Dawn says about the edginess factor. She and Russell agree there are girls on the scene who know the history of burlesque and push the envelope but much of it has become mainstream. They also say both performers and producers need to work more on educating the public and press about the history and current world of burlesque performance.

It’s a very tight-knit community of both girls and guys (known as “boylesque”) that work together to create and promote shows,” Russell says. “People spend every waking hour doing this…we try to make it art, not just a performance.” (Beth Wang)

Thanks for the great article! However, the “Fire Bush” piece was mine, and it wasn’t my burlesque debut, it was my Chicago debut, just post-Katrina. I’ve got the red locks, hence the double-entendre. Thanks! XOXO Amber Dawn, a.k.a. “Oosha Boom” [Thanks for the head’s up. We fixed it. —the editors]

Hi guys! Just to re-clarify…It was Cathy, not I, who performed with the Hellcat Hussies. The Bush number in question, that I performed, was done at a Girlie-Q (my first Chicago show) show, as I said, (the act can be seen here http://www.youtube.com/watch?v=5vQd8hNNQ0k , for the very brave). Cathy ALSO did a Bush piece at a later Girlie-Q show, after the Hussies were defunct. It was my mother and Great-AUNTS who were burlesque entertainers, not my Grandmother. Are there journalists left in this world who carry tape recorders, or who properly record and fact-check? As a writer who DOES, this… Read more »