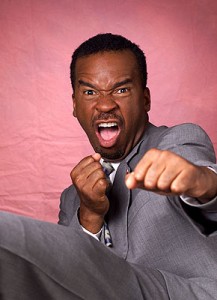 Comedy vet David Alan Grier has taken some pretty awful roles in a few godforsaken films—like Damon Wayans’ sidekick in the 1994 superhero parody “Blankman, ” or as a bumbling American soldier in the Pauly Shore bomb “In the Army Now” – but he’s become a pretty dependable and relatively enjoyable stand-up, based on his sarcastic outbursts alone. Grier’s latest project, Comedy Central’s “Chocolate News,” a “Daily Show”-style satirical news show with an African-American perspective, was recently cancelled, and though the show never really lived up to its premise, you could tell Grier still had some comedy left in him. With an enormous, boisterous on-stage persona, Grier’s the type to express wit through incredulous eruptions. Perhaps the best indicator of Grier’s reputable goofiness: his Wikipedia entry states that he’s in talks to star as Louis Farrakhan in “The Nation,” a comedic bio-musical about the minister’s life. The report, according to Grier, is untrue, yet people have been persistently asking him about it, as if it’s clearly the part he was born to play. Honestly, unless Pauly Shore comes calling again, how could he not capitalize on that idea? A Louis Farrakhan musical has “career-defining triumph” written all over it. (Andy Seifert)