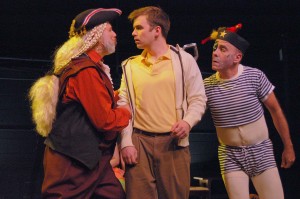 There are box office records, and then there is the unparalleled case of “The Fantasticks,” the 1960 musical that ran uninterrupted in the same off-Broadway theater where it opened for no less than forty-two years.  An upside-down riff on “Romeo and Juliet,” here, two fathers fake a feud to get their son and daughter to fall in love, the idea being—as their duet “Never Say No” tells us—that kids will always do the opposite of whatever their parents tell them to do.  The proceedings are narrated by a mellifluous narrator who talks and sings of seasons of the heart and also serves as a comic foil for the trials of the couple.  Its special charms can work even with a mediocre cast and most of us have probably seen high schools and community theaters pull it off quite movingly.  How then, to explain the current production presented by Porchlight Music Theatre that is so underwhelming? Casting is the main issue here; the narrator often speaks and sings so softly that he can barely be heard over the piano and the harp, throwing away the show’s signature song, “Try to Remember” along with the show’s poetic prose.  The young girl titters and screams and is a pure caricature while the young man is played so wispily—think Wally Cox as a teenager—that he comes across more as a friend than a love interest.  One of the fathers, in fact, looks younger than the young boy, so credibility is constantly strained.  The most notable performances of this production are William F. Raffeld and Rus Rainear in the usually throwaway roles of a senile Shakespearian actor and an assistant in a Native American getup that specializes in stage deaths.  But when the fake Indian gets the most applause at the curtain call, you know you are at a “Fantasticks” that will be a challenge to try to remember.  (Dennis Polkow)