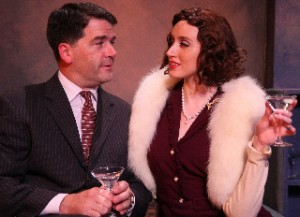 Oh, the joys of alcohol. City Lit opens its thirtieth anniversary season with artistic director Terry McCabe’s adaptation of popular Dashiell Hammett novel “The Thin Man,” a quickfire barrage of witty one-liners, copious drinking and classic noir. Christmas week 1932, and Nick Charles, a former detective who’s now retired and married to Nora, a young, wealthy socialite, is reluctantly drawn into a murder investigation with a cast of characters dug up from his past life—cops, street thugs and a dysfunctional family of scheming melodramatics. Lies are lies, unless they aren’t. Hammett famously based all three main female characters on his longtime lover Lillian Hellman. We make our way through the mystery with Charles (played with a tough-yet-joyful bounce by Wm. Bullion), as he often breaks from the rest of the cast to narrate and move the story along. And the booze—the characters in “The Thin Man” drink heavily, constantly and without worry, hopping from cocktail party to speakeasy, martinis and scotches and flasks and tumblers lubricating the mostly convoluted plot. (“It’s too early for breakfast,” Charles tells his wife one morning, and opts for a cocktail instead.) From the first scene, the play slams the audience with an abundance of information and names, and doesn’t let up—in a book, the information has time to settle in your head, but on stage there’s no opportunity to relax, and the intense concentration demanded is a bit exhausting. The rapid speech patterns necessary for a noir such as this make it even more difficult, and the night I saw the play a couple actors flubbed lines on occasion, which was more distracting than it would’ve usually been. Another problem with this production, though minor, is having actors play multiple roles, with not much visual distinction between the characters. (Lee Wichman plays three separate roles and each time he entered the stage there was brief confusion of which character he was supposed to be.) But these issues with the production don’t negate the overall enjoyment, and any fan of noir will leave satisfied despite the lack of cohesiveness, as each of the actors performs with a knowing, playful glee. Michael B. Woods, in a small role as a lowlife, provides an enthusiastic jolt to the show. (Tom Lynch)