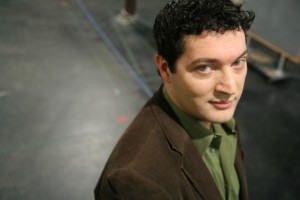 If the breakup of American Theatre Company is akin to a messy divorce, consider artistic director PJ Paparelli in the post-heartbreak phase. While the memory of being jilted by twenty-three members of his twenty-seven-member ensemble back in the spring still smarts, the Alaska native isn’t crying into a carton of Haagen-Dazs. “None of this has been easy,” he now says of the split, “but I want us to be a company that rolls up its sleeves and gets to work.” This year also marks ATC’s twenty-fifth anniversary and, while Paparelli is free to celebrate without the old ball and chain, he’s also embarking on the landmark season without the company’s founding members. “It’s certainly bittersweet,” he says.

For those who missed the action, suffice it to say that irreconcilable differences between the tight-knit ensemble and the relatively new Paparelli (who was hired in 2007 after serving as the artistic director of Perseverance Theatre in Juneau) caused the acrimonious and abrupt walkout. Amidst the drama, the city’s theater blogs were clogged with commentators—some of whom decried Paparelli as a carpetbagger with dictatorial proclivities, others who deemed him a risk-taking visionary.

The dust has since settled. The former ensemble members reorganized under ATC’s original name (American Blues Theatre) and Paparelli got the house—ATC’s cozy, industrial 134-seat space on Lincoln and Byron. Like after any divorce, the house feels a bit empty now (the ensemble is currently comprised of three actors) but the single life also has its perks. As any recent bachelor can attest, the main upside to a painful breakup can be summed up in a single word: freedom.

And Paparelli is certainly embracing his accidental autonomy. This week the theater opens its season with “Yeast Nation (The Triumph of Life),” a rock musical based on the precarious lives of single-celled organisms penned by “Urintetown” writers Greg Kotis and Mark Hollmann. “It’s a Wonderful Life” holds onto its annual winter slot in ATC’s lineup—but this time, Palestinian-American ensemble member Kareem Bandealy will play the iconic Bedford Falls hero George Bailey. “I want us to be what our name says we are: an American Theatre Company,” says Paparelli, “And that needs to be reflected both in the work we do and the audience who comes to our theater.” The final two plays in ATC’s season are both authored by Latino writers—”Distracted” by Lisa Loomer receives its Chicago premiere, and “Welcome to Arroyos” by Krisoffer Diaz notches its world premiere. The former is a comedy on the parental plagues of ADHD, the latter a Latin-infused musical narrated by two spinning DJs.

So as Paparelli redecorates the house (one does wonder what he did with all those old ensemble-member headshots…), it’s clear he’s painting with a decidedly colorful palette. “In Chicago, we have strong African-American, Asian and Latino companies,” he explains, “but frankly, this city lacks a strong multicultural ensemble. Our city is segregated, and our theater companies unfortunately reflect that.”

Even last season, before the mass exodus of his ensemble, Paparelli programmed an aggressively diverse season—collaborating with both Congo Square Theatre Company (on rotating productions of “Topdog/Underdog” and “True West”) and About Face Theatre (on “Hedwig and the Angry Inch”). “Hedwig”—a rock musical that starts with a botched gender reassignment surgery—turned out to be the theater’s highest-grossing show to date. “The great thing about ‘Hedwig’ was, we didn’t do a gay play for a gay audience. We did a gay play for our audience—and they really embraced it.”

Paparelli says he plans to stick with the ensemble model, despite the inherent challenges of artistic democracy. “I hope that the work we are producing will attract artists who believe in our mission,” he says. He wants to expand the ATC ensemble in the spring, though he wouldn’t say how many headshots he plans to hang up on that vacated wall space.

And just because Paparelli is now severed from most of his original company doesn’t mean the twenty-fifth anniversary celebration is off: true to his level of ambition, Paparelli recently asked twenty-five writers from across the country to pick a year between 1985-2010 and write a short play inspired by that time period. “I just want as many different American voices heard as possible,” Paparelli says. “Our doors are wide open.”

So it seems playing the field isn’t going to be the problem for Paparelli—right now he’s all about courting new conquests—but only time will tell if he’s serious about settling down with a new ensemble of actors. If he finds the right fit, it might turn out that Paparelli is a family man after all.