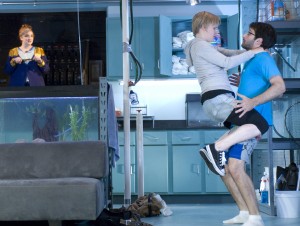 Jason Sutherland, the new artistic director at Evanston’s Next Theatre, makes his Chicago directorial debut with Peter Sinn Nachtreib’s end-of-the-world comedy “boom.”  This play crackles with all the smartassery and f-bombs one would expect from a hip new play, although sometimes that hipness feels a little contrived. Don’t get me wrong, there are some really funny moments and artful turns of phrase, but what starts out as a rather intriguing story about two quirky loners bunkered down together as a result of a Craigslist personal ad suffers the drag of a second storyline, that of a museum curator with career troubles. Sutherland does an admirable job of keeping the action moving in Andre LaSalle’s beautifully rendered basement lab, but ultimately the play aches when it departs the apocalyptic aftermath and delves into the unnecessary personal problems of the curator. Although Nachtrieb exhibits great craft in shaping inquisitive characters full of honest emotional malfunction, he misses when he forces theatricality that is already present in the play. (William Scott)

Despite strong technical elements, The Next Theatre production of BOOM is a misguided heavy-handed mess. A good portion of the humor in the text was completely lost and I was left uninvested, not caring, in the characters and their plight. The role of Barbara is seriously miscast and misinterpreted, no fault of the actress. I blame the majority of their staging on the direction as opposed to the writing. The reason I say this is that this summer I went to see a non-equity staging of the play in the back room of a bar in Louisville. The Louisville staging… Read more »