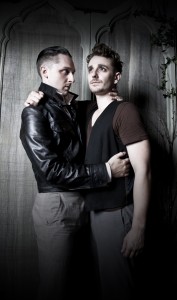 It’s hard to tell whether this production succeeds in spite or because of its haphazard and often schizophrenic character. “Baal” is Brecht’s first play, and there’s not much substance to the story about its Romantic title figure whose lust for sex, brandy and poetry ends up destroying him and everyone who comes within his orbit. Though billed as a “live music spectacle,” EP Theater’s production has a minimalist percussion-and-cello score by art-rockers The Loneliest Monk, with gong-like cymbals recalling Japanese Noh theater that would later deeply influence Brecht. In contrast, acting is fervent if sometimes distractingly varied in style (and often accompanied by a goblet of booze). The show is carried by a magnetic Craig Cunningham as Baal and his incredible chemistry with Ekart (Shawn Pfautsch), Baal’s closest friend (maybe more), near-double and catalyst of destructive desires. The great contrasts in this show—between the spectacle of frenzied performances, restrained music and some truly inexplicable lighting and blocking choices—result in a permanently off-kilter experience that’s intriguing, alienating and, well, Brechtian. (Monica Westin)