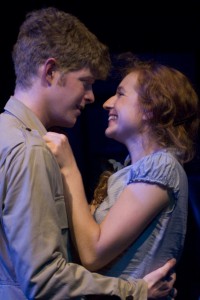 It’s almost a full hour into Brendan Behan’s play before we meet the hostage of the title, a young British solider caught up in a game of political tit-for-tat between the IRA and England in 1959. Everything prior to his arrival feels like so much throat-clearing—more scene-setting and forced colorfulness than any show needs. It all takes place in a Dublin rooming house that has become home base for a raggedy group of prostitutes (the cross-dressing and the merely tawdry) who pay rent to the practical-minded Meg (Donna McGough) and the slurry-voiced, exhausted revolutionary Pat (Eamonn McDonagh).

The joint is teeming and steaming with sweaty bedclothes and long-held Irish resentments. Every so often the gang bursts into song, as if life was one music-hall performance after another.  At one point, a bare-knuckled fist fight hilariously morphs into a jig. It is a surrealistic, whirling dervish of a show (directed by Jonathan Berry for Griffin Theatre), and yet the bitter comedy feels forced in places, a bit dullish in others.

The production doesn’t really gain traction until the hostage (Rob Fenton, looking like Prince Harry with a conscience) appears, and his dalliance with the very sheltered, very attractive housemaid (Nora Fiffer, who is every inch the definition of fetching) roots the play on real emotional ground more than any of the sentimentalized Irish eccentricity surrounding it.  (Nina Metz)