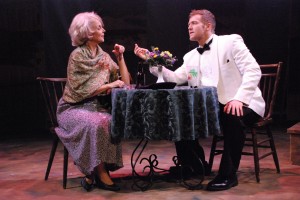 I was entertained by playwright Rebecca Lenkiewicz’s “The Night Season, ” a British play now receiving its Chicago premiere at Vitalist Theatre. But, to be honest, the tale of three sisters living, loving and longing through life’s vicissitudes moved me more when it was told by Chekhov and called “The Three Sisters.”  I certainly laughed much more when the comedic clash between rural small-town Irish folks and Hollywood moviemakers was explored by playwright Marie Jones and her “Stones in his Pockets.” And I definitely felt an emotional connection for a beleaguered clan of Irish romantics haunted by bittersweet memories when those characters inhabited a play called “Dancing at Lughnasa” and their author was Brian Friel.

Comparisons between a playwright’s sophomore effort (“The Night Season” was Lenkiewicz’s second major play produced in London) and Chekhov may indeed be odious, as they say, but Lenkiewicz seems to have done everything to encourage it. Lenkiewicz’s oldest sister is insecure and bookish yet becomes the glue that holds her crumbling family together.  The middle sister is acerbic, emotionally guarded and almost falls apart after a love affair with a dashing stranger passing through town (in “The Night Season,” he is an American actor stationed in Silgo, Ireland, to play the role of poet W.B. Yeats in what seems to be a terrible celluloid biopic).  And the youngest sister, still an idealist despite life’s hard knocks (although like Chekhov’s Irina she is given her last-minute emotional breakdown), has a Communist boyfriend who is (get this) yearning to visit Moscow. If only she, I mean he, could get to Moscow!  Other parallels abound, including an alcoholic paterfamilias who waxes poetic, an eccentric (read: mentally unstable) matriarch who churns out contrived nuggets of kinky and spiritual wisdom, but almost everything reminds one of something else, something better.  Fragments of Yeats’ poetry, explicit references to Shakespeare’s “King Lear” and a quick-cutting, episodic structure to the scenes will only serve to make it seem like there’s a lot more imagination and originality here than there really is.

Audiences who have been theatrically versed and/or who are literary-minded will likewise find “The Night Season” a pleasing yet ultimately hollow experience.  At least the acting from the three beautiful and talented actresses playing the sisters (the men are either pretty-but-dull or just dull) keeps the evening from being a total waste.  The direction from Elizabeth Carlin-Metz is also first-rate, uncovering even the smallest nuance in some throwaway scene.  And the physical design, by Craig Choma (sets), Richard Norwood (lighting), Gregor Mortis (sound), Rachel Sypniewski (costumes) and Charlie Alves (projections and video), is glorious and much better than this play deserves.

To be fair, Brian Friel (“The Irish Chekhov”) wasn’t completely written off when he blatantly mimicked Chekhov with “Aristocrats” in 1979, about a decade before he found a way to transcend imitation, find his voice and grace us with “Lughnasa.”  So there may still be hope for Lenkiewicz, a playwright who with “The Night Season” seems to have dramatized that old saying, ‘imitation is the greatest form of flattery.” (Fabrizio O. Almeida)