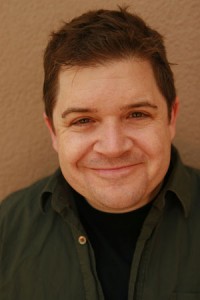 A stand-up stud in indie circles (an automatic distinction once Sub Pop releases one of your performances), Patton Oswalt—along with his “Comedians of Comedy” cohorts Zach Galifianakis and Brian Posehn—represents the best in nerdy, heavy-set comics. Oswalt has the gift of being able to rip on the absurdity of Middle America (his critique of the KFC Famous bowl has become a classic take on America’s total lack of dignity), but still knows how to rip himself a new one. One of Oswalt’s best bits recalls a lavish Hollywood party where he’s tempted by a glorious display of food that none of the thin celebrities are eating, when who should emerge but actor Brian Dennehy, who embraces Oswalt as he grabs a plate full of food, telling him “Character actors, who gives a fuck if we’re fat?” Credit Oswalt for finding a lead role in a film without having to shave off calories. He currently stars as the biggest New York Giants fan in the world in the critically acclaimed indie film “Big Fan.” (Andy Seifert)