by Monica Westin
September 28, 2009Filed under: 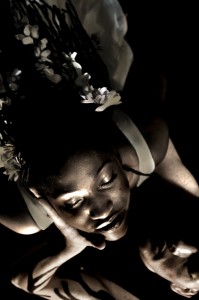 Caridad Svitch’s expressionist play imagines Ophelia’s return from the waters that drowned her, finding herself in a no-man’s land where a self-destructive Hamlet known as “Rude Boy” proves impervious to change; Gertrude is the madam of a brothel; and Rosencrantz and Guildenstern, cross-dressing and queer, parody the romantic melodrama that traps Ophelia in her quest for revenge and redress. The writing itself is sumptuous, Elizabethan language blending seamlessly with modern English and punctuated with sharp doses of African-American vernacular from Ophelia and Gertrude, cast as black and therefore a double minority despite their endless assertions to the contrary. “12 Ophelias” at heart is all about power: “You fit into other people’s needs, you get left out, you see?”

The production at Trap Door makes the one great error of focusing on sex, with erotic tension between nearly every character borne out in awkward homoerotic fight scenes and an indulgent amount of simulated sex. And where the script is provocative and often extremely gratifying (what’s more fun than seeing a play we know inside and out turned on its head?), the production makes a few questionable aesthetic choices, such as a chorus of women in white dresses playing folk instruments during the play’s Brechtian songs, which sometimes make the artistry of the play feel merely decorative. Mildred Marie Langford is valiant and opulent as Ophelia, but Jen Ellison and Casey Chapman end up carrying the show as an electric R&B duo, voices of reason enmeshed in their own unspoken romantic tragedy. (Monica Westin)