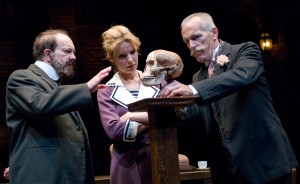 There are myriads of problems with “Fake,” an ambitious new play written and directed by Steppenwolf ensemble member Eric Simonson.  The work’s agenda and conclusion—namely, that we perceive the reality around us according to our biases, i.e., a synonym for “belief” in Simonson’s lexicon—is an interesting one, but the juxtaposed episodes that precede it do not end up leading to the work’s finale. It is as if Simonson grafted unrelated episodes as a long prelude that ultimately fail to organically arrive where Simonson wants them to go.

Taking its structure from Tom Stoppard’s “Arcadia,” the play takes us back and forth from Sir Arthur Conan Doyle’s attempt to prove that the Piltdown half-man, half-ape skull was a fake, to those who are, in fact, about to reveal exactly that some two generations later. It’s a fascinating premise, but aside from the fact that Simonson does not have Stoppard’s gift for language (who does?), his use of historical characters alongside of fictional ones sets up spiderwebs that the play is unable to satisfyingly raise, let alone untangle.

Why would Doyle, for instance, best-known as the creator of Sherlock Holmes and one of the most gullible of modern authors who actually believed in the credibility of photographs of fairies even after they had been proven fraudulent and who thought that his friend Harry Houdini had magical powers despite Houdini constantly telling him that he didn’t, even falling for the same spiritualists that Houdini had exposed as fakes, be suddenly so unaccepting and skeptical?  Yes, the play has an answer, even more bizarre and unlikely than the premise itself.  And how could Pierre Teihard de Chardin (here inaccurately referred to as “Chardin”), one of the great minds of the era whose complex works were so far ahead of their time that they were banned by the Catholic Church, be shown as a country bumpkin who thinks that Doyle’s “The Lost World” is a great read and who is reduced to mouthing Hallmark card platitudes on faith and science?  Clearly, if you are to use historical characters, you need to stay within the realm of what is known about these characters to preserve some sense of credibility; in these two cases, you don’t need to speculate: they are well-published, and their thoughts on all of these matters are well-known and are as a close as the nearest library or bookstore.

As usual in a Steppenwolf show, the ensemble acting is terrific, and the cast is given a workout of playing dual roles in both time periods, not only changing costumes but hairpieces and facial hair as well from scene to scene, to say nothing of accents: every character has a different one.  But here again, there appears to be no specific thread connecting these two sets of characters across the two time periods, aside from the obvious device of the skull itself.

Writing and directing a new show is rarely a good idea, and you can’t help but think that the problems with the work would be far more apparent to Simonson were he on the sidelines only concerned with the work itself instead of also having to be the one to bring it all to life onstage.  Sometimes distance can show you the forest rather than remaining lost amongst the trees.  (Dennis Polkow)