by Dennis Polkow
September 28, 2009Filed under: 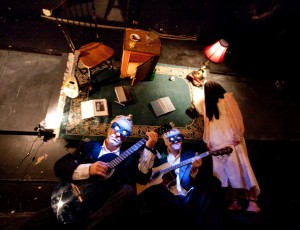 There are those who find the Neo-Futurists scary any time of the year, so the thought of the avant-garde ensemble actually setting out to be scary for the Halloween season sounded intriguing, to say the least.  As you wait for your Edgar Allan Poe-themed tour to begin, you notice, ever so subtlely, the presence of a beautiful-but-hushed-and-pale young woman sitting in a corner copiously planting herself in dirt, an upside-down take on Poe’s fear of premature burial. Old photographs surround her, some which she buries along with her, and at least one audience member has her program spirited away and buried along with the photos. A personable and playful but mysterious guide clad in a black robe and hood with a half glow-in-the-dark facemask greets our group in silence and throws a glowing red bouncing ball to see who will go first.  Entering a long, scary hallway full of Andy Warhol-like portraits of well-known dead people, we make our way to a room based on Poe’s “The Oval Portrait” where a game audience member is given a palette of real paints and a brush and invited to paint a slowly deteriorating model on a video screen. Our aesthetic host, meanwhile, judges the quality of each, crumbling up ones that the rest of us decide do not represent honest artistic efforts.  A room devoted to “The Tell-Tale Heart” has audience members reading free riffs on the tale from a deck of cards (two of us had to chime in with punctuated “thump-thump” sound effects) but to careful and heartfelt direction from our silent guide. In another room, “The Bells” are read to us via loudspeaker while a man dressed as the Egyptian god of the dead does a dance of death with a blood-soaked dead woman in her burial shroud.  If none of this is getting to you, on our trip through, our guide broke character, removed her mask and began convincingly screaming for another team member because a man was chasing another man with a gun when she went to get some props from the outside.  An audience member offers to call 911 and several are buying this hook, line and sinker as our guide gives us a short primer on the things that really scare her. Will we be safe as we proceed?  A room based on “The Fall of the House of Usher” features space-age dead people on the floor who ascend and take us by the hand to an impromptu haunted hootenanny.  The hour-long tour really does a great job of offering fear on whatever level you enjoy it: the creepy, fun kind that we remember when we were kids, or the “thrill” based kind based on surprise and the unexepcted.  In the hands of the Neo-Futurists, who magnificently pull all of this off never showing tongue inside of cheek, it is the perfect start to the Halloween season.  (Dennis Polkow)