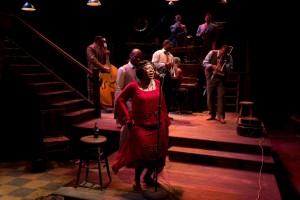 When writing reviews it’s rare that I’m able to use the word “powerful.” Still, I can’t think of a better description for Court Theatre and director Ron OJ Parson’s superb revival of playwright August Wilson’s “Ma Rainey’s Black Bottom.” Indeed the show, which was first performed more than twenty-five years ago, is teeming with themes and ideas—assimilation, internalized racism, the appropriation and exploitation of one culture by —that still resonate with an incredible topicality as if the play had been written yesterday.

Wilson’s setting for his play is a fictional Chicago recording studio in 1927.  A white record producer and white music manager are trying to lay down some tracks of black singer Ma Rainey (the real life “Mother of the Blues” who recorded with Louis Armstrong and mentored Bessie Smith, among other achievements) performing her signature number, “Ma Rainey’s Black Bottom.” But this tempestuous diva will only record when she feels like it, when the conditions are just right and when her demands—necessitating everything from cold bottles of Coca-Cola to her stuttering nephew’s inclusion on the recording—have been met.  In fact, the only difference between her and any modern-day recording star is that Ma Rainey is a black woman in the 1920s, and the fascinating power struggle between her and her white “handlers” are echoed within Ma’s quartet of black players, whose own tensions and resentments build to a violent climax.  Whites exploiting blacks exploiting each other, the irony of black music being ripped off for the entertainment of a racist society, and the debate (still ongoing) as to the duty of oppressed classes to be politically active versus complacent, turns Wilson’s tiny recording studio into the American Black experience writ large.

In lesser hands, this sometimes poignant, mostly angry, always compelling piece could have come across as didactic and exclusionary, its complex characters’ poetic and emotionally soaring monologues histrionically off-putting. But Parson’s staging is so raw and intensely realistic that there isn’t a false note in the entire evening, his acute production realizing every emotional high and low, and nailing the melancholic comedy at the heart of the piece so that it never feels like a performance but rather real life spilling out into the auditorium.  To this extent he’s been aided immensely by designer John Culbert’s multilevel set that practically places the action in the audience’s lap.  This revival has been enviably cast and the actors, especially the four gentlemen who bring to life Ma’s quartet of musicians, don’t “play” their roles as much as disappear into them.  It’s wrong to single out anyone in Paron’s ten-person cast since this is some of the strongest ensemble playing that I have seen in some time, but Greta Ogesby in the title role stands out additionally for her singing, as well as for her subtle yet intensely provocative handling of Ma Rainey’s bisexuality.  An achievement on every artistic level, and a revival of an August Wilson classic that I doubt will be bettered anytime soon. (Fabrizio O. Almeida)