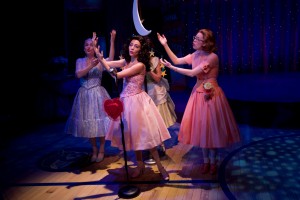 Most Jukebox musicals come in one of two formats. Some take a compilation of well-known songs and use them to tell the life story of the songwriter or the performer who made them famous. And some create a fictional storyline within which they shoehorn a bunch of unrelated songs via a contrived plot.  “The Marvelous Wonderettes, ” the jukebox musical at Northlight Theatre featuring those gloriously groovy tunes of the fifties and sixties, may be the first to do both.

The first act, set in a fictional high-school auditorium (period-evoking set and details by Michael Carnahan), sees Cindy Lou, Missy, Betty Jean and Suzy (aka “The Marvelous Wonderettes”) providing their 1958 senior prom’s entertainment by belting out recognizable hits such as “Lollipop,” “Mr. Sandman” and “(Love is like a) Heatwave” in a concert format.  There is a small attempt to develop individual character and explore the quartet’s interpersonal dynamics throughout, but most of this act, crafted with the kind of wholesome 1950s pre-psychedelic American sweetness liable to send a modern-day cynic into a sugar coma, is little more than an excuse to stage a K-Tel Golden Oldies musical medley.  Act two, however, which takes place in 1968 at the Wonderettes’ ten-year reunion, is surprisingly successful at infusing these recognizable melodies with familiar melodrama.  And so, Cindy Lou reminisces about Billy Ray, the only boy who could ever reach her (cue “Son of a Preacher Man”), “Respect,” sung by the girls to one of their troubled sisters, is the song that inspires Suzy to confront a neglectful husband and “It’s My Party” is Betty Jean’s lament for a lost boyfriend (bad girl Tempe Thomas’ spunky delivery providing welcome respite from the squeaky-clean proceedings).

This musical love letter to anyone who ever stole a kiss while listening to these original recordings on vinyl—which may be the majority of Northlight’s audience given that theater’s age demographics—is the brainchild of writer Roger Bean, and this Chicago-area production is the fifth he’s directed following mountings in Milwaukee, Laguna Beach, Los Angeles and New York, all of them apparent successes. No doubt this one will be, too, if creating musical goodwill and offering feel-good nostalgia is the standard by which to judge it. Cat Davis, Dina DiConstanzo and Laura E. Taylor round out the cast of the “Marvelous Wonderettes,” and, if at the press matinee I attended they didn’t bring down the house with their vocals (were they possibly saving their voices for the evening?), the exuberant audience was clearly won over by their musical competence, charisma and the joyful innocence demanded by the material. (Fabrizio O. Almeida)