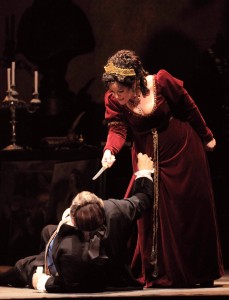 In these trying economic times, Lyric Opera management is taking no chances: not only is the company presenting one of its most conservative seasons in the company’s fifty-five year history, but it broke off contract negotiations last Friday night with the Lyric Opera Orchestra, which had rejected a shorter season and wage freezes, i.e., a significant reduction in pay.  That management appears to have the upper hand was indicated by the fact that the Orchestra went ahead and performed at Saturday’s gala season opener without a contract. In better times, the Orchestra would have been on strike and the performance cancelled, but at least orchestra members were passing out pamphlets to the black-tie and gown set that walked down the red carpet leading to the doors of the Civic Opera House explaining their plight. Inside, too, there were indications that the recession was having an impact: the usual opening-night complimentary champagne became $9 a glass after Act I; the party favors handed out at evening’s end—a company poster—were “one per couple,” ushers literally grabbing them out of patrons’ hands who hadn’t heard.

Inside, the company was presenting its most-oft-performed tried-and-true Italian warhorse, Puccini’s “Tosca,” an opera by an Italian about Italians and written for Italians, and in most past seasons of the company long known as La Scala West, sung by Italians, or at least an Italian somewhere in the cast or in the orchestra pit. Not this time around. Soprano Deborah Voigt, a stellar Wagner and Strauss interpreter (neither are being heard in this budget-crunching season) and best known outside of the opera world for her celebrated weight-loss surgery after being fired by Covent Garden because her ample size made her unable to wear a kinky designer’s costume, sang the title role, a strange bit of miscasting. Although Voigt was able to bring some drama to the role of the jealous and temperamental diva, her vocal color was far too heavy for Puccini and seems more suited to Verdi.  Even more bizarre was the company’s decision to have Russian tenor Vladimir Galouzine sing the role of Cavaradossi, giving that role a heft and coarseness that became particularly distracting in the love scenes.  Bass James Morris who, like Voigt, is most associated with Wagner and sang his marvelous Wotan for Lyric’s only two “Ring” cycles in its history, has been the company’s Scarpia of choice for some time now, but his voice, too, is dark and brooding in the role and he has always been rather wooden in it dramatically.

Sir Andrew Davis kept things slow in the pit and while he fired up the melodrama, there was little in the way of Mediterranean sunshine.  The Franco Zefferelli-and-Renzo Mongiardino-painted backdrops—created at Covent Garden for Maria Callas and cutting-edge in their day—are now 45 years old, looking every bit their age despite consistently low lighting levels. (The Zefferelli team has since created an entirely new production for the Met, although he has disavowed any connection to a controversial “Tosca” that opened the Met season a week ago to sustained boos.)  If Lyric wants to make use of an older, more traditional production, it would do well to resurrect the more sumptuous three-dimensional design of Pier Luigi Pizzi.  Meanwhile, a new cast of principals and conductor will take over in January, so perhaps that will be a more satisfying experience.  (Dennis Polkow)