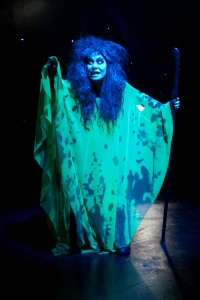 Wasn’t it Einstein who once famously defined insanity as doing the same thing over and over again yet expecting different results?

After several New York workshops and a 2007 world-premiere production at Alaska’s Perseverance Theatre, Chicago is now receiving the much-anticipated Midwest premiere of “Yeast Nation (The Triumph of Life),” the follow-up musical from the men responsible for “Urinetown, The Musical,” composer Mark Hollmann and lyric- and book-writer Greg Kotis.  After experiencing the production on stage at the American Theater Company—and mind you, I went twice during opening week, once to the official opening and later again to confirm what I had seen that night—I shudder to think what “Yeast Nation” looked and sounded like two years ago.

Its fundamental problem—the fact that “Yeast Nation” doesn’t know what it is nor what it wants to say—basically reduces the piece to a vacuous experience that looks and sounds like a satirical musical but ultimately comes across like an overlong sketch on steroids. It’s the story of a colony of 4-billion-year-old yeast living at the bottom of the ocean, threatened with extinction and oppressed by a tyrannical king afraid of evolution, and it serves up song and dance romance laced with familial and political power struggles. The love story is un-compelling, the Machiavellian machinations predictable and the score banal, but most disappointing is that you never understand what the creators are poking fun at. Is “Yeast Nation” just an excuse to parody more musicals?  Director PJ Paparelli’s staging nods to “Rent,” “Cats” and “The Lion King” certainly suggests so. Is it a ringing (and singing) endorsement for going green?  The colony in collapse in “Yeast Nation” is said to have doomed itself with extravagance and an insular world view. Is it criticizing Darwinism, Modernism or Fundamentalism?  The creators’ deliberate resistance to scientific accuracy in the piece (were yeast really the first organisms to inhabit the planet?) leaves a lot open to interpretation, or maybe Hollmann and Kotis don’t know or care themselves, if their baffling appearance on Chicago Tonight the evening before the press opening is anything to go by.  Spouting cheeky one-liners (“It has a very period feel,” remarked Kotis) and saucy sound bites (“The strangest story ever to be musicalized”), they didn’t seem to have much else to say at all and remained content, it seemed, with their own cleverness at having anthropomorphized and musicalized salt-eating yeast.

So perhaps, just like “Cats” was about singing and dancing felines and nothing more, “Yeast Nation” is about singing and dancing one-celled organisms and nothing more, as well as some good old-fashioned song and dance.  Unfortunately, despite a promising and bouncy opening number (“Hear the Song”—which they should have showcased on Chicago Tonight instead of the precious and whiny “You’re Not the Yeast You Used to Be”), the unmemorable score, produced by a four-piece band live on stage, consists of a parade of undistinguished pastiche numbers, replete with puerile rhyme schemes (“idea” is rhymed with “Sea-a”; “crappy” with “snappy,” etc.).  The problem here is that bad pastiche only serves to remind one of the good songs they imitate. And so “I’ll Change the World Around Her,” with its propulsive beat backing amplified melodic mush, reminds one of shopworn Jonathan Larson. The soulful Carole King classic “It’s Too Late” seems to have inspired the soulless “Little Sister” here.  “Stasis is the Membrane” is meant to be the gospel-like anthem, but without any big voices to belt it out, it peters in performance. The internal rhythms of “Liar” reminded me of the far superior “Feed Me, Seymour” from “Little Shop of Horrors” and “Love Equals Pain,” “Yeast Nation”’s big arena eighties-style rock number, would barely inspire three people to lift their lighters. With maybe two exceptions, the Chicago cast fail to distinguish themselves, either vocally (thin voices, sloppy phrasing) or stylistically (half the cast are playing as if in a Disney theme-park show; the others think they’re doing Shakespeare). Tommy Rapley, the show’s choreographer and a beautiful dancer in his own right, seems to have been bereft of ideas and he fails to create any interesting movement vocabulary for his creatures. The high point of his sadly disappointing work here is a tired second-act disco combination that can’t even manage to end with a strong applause button.

This is the first musical I’ve seen staged by director and ATC Artistic Director PJ Paparelli, and while I think he has a good instinct for staging musicals—his inventive use of ATC’s problematic and claustrophobic auditorium was one of the evening’s few good surprises—his directorial hand should have been all over Hollmann and Kotis’ music, book and lyrics in the rehearsal room, giving them a focus and point of view, cutting out unnecessary sequences and numbers, and shaping and molding this material into something worthy of its creators’ reputations. As it stands now, “Yeast Nation” is not only one of the worst musicals I have ever seen, it is also a musical black eye for Paparelli and ATC. (Fabrizio O. Almeida)