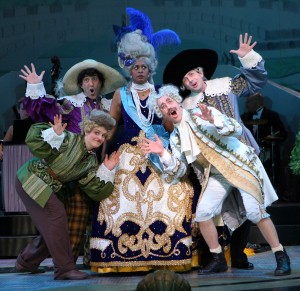 It should be said upfront that I have never been a huge fan of the Marx Brothers. I grew up with their films constantly being on television and could certainly find laughs in individual bits, but their movies always looked like watered-down vaudeville captured on celluloid, right down to Groucho making his one-liners right into the camera as if he were in front of a live audience. As time has gone by, that style of comedy has fallen so much to the wayside that it is actually refreshing now to experience it again, especially interacting with it as part of a live audience, which makes all of the difference.

Faux Marx Brothers are no substitute for the original, to be sure, but happily, they do not pretend to be. What you have with Goodman’s “Animal Crackers” is an attempt to give us an entertainment time-machine, an interactive experiential celebration of what our great-grandparents found diversionary some eighty years ago.  The Marx Brothers films tended to focus on them, understandably enough, since they were the stars of the films and other characters only existed to give them a context for their shtick.  But in 1928, when “Animal Crackers” opened on Broadway, their comedy was only one element of a vast vaudeville tapestry that included singing, dancing, juggling, beautiful chorus girls, et al. When you see a complete show like “Animal Crackers” with all of its trimmings, you can’t help but be struck by how much more diverse tastes were back then.

“Animal Crackers” is part operetta, to be sure, and it is surprising how well many of the songs—most of which were cut from the film—hold up today. (Anyone with even a cursory knowledge of the Marx Brothers will recognize Groucho’s lifelong signature song “Hooray for Captain Spalding,” which did make the film and was subsequently used as the theme song for his longtime radio and television game show “You Bet Your Life.”)  Kudos to director Henry Wishcamper and musical director Doug Peck for taking them seriously and realizing that variety is precisely what made a show like this work.  If you didn’t like want was going on, like Chicago weather, just wait, and something else will come along that you will. Likewise, choreographer John Carrafa takes the dancing seriously, whether a chorus line is in tight tap-dance coordination or whether the dancing is part of a comedic routine. And “clowning director” Paul Kalina from Chicago’s 500 Clowns keeps the sight gags fresh and the one-liners well-oiled.

Once you get used to the idea that nine performers have taken on every role in the show, it works because you realize that every one of them is razor-sharp in their timing. Some of the comedy, though family-friendly, was more suggestive than the Marx Brothers movies ever could be, and certainly more ethnic, in some cases, right out of Yiddish theatre of the day. And the Brothers’ principal innovation, namely that they could not only be an improvisatory diversion but part of the “serious” entertainment as well, has been preserved: Joey Slotnick’s Groucho as Capt. Spaulding sings and dances, Jonathan Broady’s Chico as Emanuel Ravelli plays the piano and Molly Brennan as Harpo’s “The Professor” mimes a faux harp. The reckless abandon and sheer joy of the entertainment of the day makes a brief but glorious comeback that is not to be missed.  (Dennis Polkow)