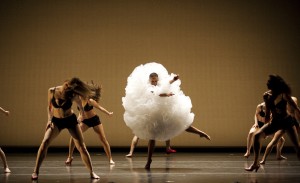 In the midst of this, their tenth anniversary year, the founder and artistic director of Luna Negra Dance Theater moved to New York to take the helm of Ballet Hispanico: the first company he danced with professionally. This week, Eduardo Vilaro is back in town to premiere “Danzon,” new work for Luna Negra, now in the process of vetting a new creative director. The return is a comfortable one; talking with him in the rehearsal space on South Wabash, watching him direct and critique during rehearsal, it doesn’t feel as though Vilaro ever left.

“I miss Chicago,” Vilaro says. A Cuban immigrant, he spent his later childhood and early professional life in New York, then left fifteen years ago when the city was still, as he puts it, on edge. “It’s lost a little bit of that edge, but what it hasn’t lost is this constant energy of creation, both capitalistically and artistically—there’s a lot of movement.” New York has changed significantly in the last decade and a half, but Vilaro is quite comfortable returning to direct Ballet Hispanico. “I don’t feel estranged,” he says. “I feel like the environment, the actual physical space welcomes me.” Change comes naturally to Vilaro, who describes himself as an immigrant who has still not found home. “For a while I was extracted from my family. In the assimilation process you’re ripped apart. It gives you drive, but there’s a harsh part, where you never know where you’ll plant your feet. It puts me in a place where I need to connect.”

For now Vilaro is staying connected with Luna Negra and forming new ties via a collaboration with Latin jazz artist Paquito D’Rivera. “Danzon” is a sexy, playful work that weaves lush athleticism sprinkled with lighthearted break steps into D’Rivera’s stormy, suggestive clarinet lines. The piece will be presented as part of Luna Negra’s fall performance this Saturday at the Harris, along with repertory favorites including the sultry, cinematic “Tango Vitrola” by Argentinean choreographer Alejandro Cervera and “Nube Blanco,” Annabelle Lopez Ochoa’s delightful, immensely witty surrealist confection that must be experienced at least once.

“I’m going to do my best, to stick to my vision of the impact I want for the whole Latino community,” Vilaro tells me. “Here to New York to Los Angeles to Latin America to Spain—my goal is to connect, not disconnect. I want to keep working on giving voice to a culture while inviting people in to explore.” (Sharon Hoyer)