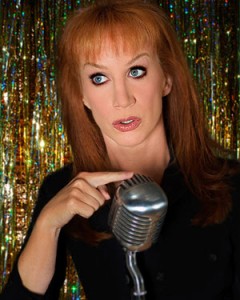 I assume Oak Park-born comedienne Kathy Griffin is at least kind of funny. Between her Emmy-award winning reality show, “Kathy Griffin: My Life on the D-List,” her best-selling book “Official Book Club Selection: A Memoir According to Kathy Griffin,” and her general omnipresence on cable, Griffin has somehow parlayed her giggly giddiness and approximately twenty-seven plastic surgeries into inexplicable appeal. Hey, more power to her, I’m just clearly not in her target demographic (which I gather ranges between sorority sisters and Oxygen channel devotees) so I’ll assume my annoyance with her is just a guy thing. I’ll admit, if you search her rambling storytelling set, you’ll find a touch of satire on the state of gossipy Hollywood. It’s just particularly grating satire. Ah yes, you’re scratching and clawing for any publicity you can grab because you’re a “D-list” celebrity, one of many bottom-of-the-food-chain celebrities who can charge $50+ to see their set. Seriously, $50? I could go see Bob Dylan in a few weeks for that kind of money, and at this zany, upbeat point of his career, he might even be funnier. (Andy Seifert)