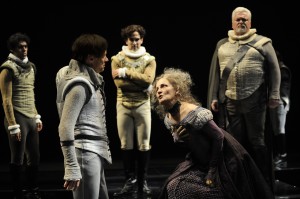 The finale of the history plays, “Richard III” is that remarkable early work of Shakespeare where the Bard fully developed his villain chops, i.e., his ability to create a character that, though thoroughly despicable, can take the audience into his confidence so disarmingly and with such charm that we become virtually complicit in the crimes that are to follow just by becoming engaged in the play.  Or at least, it is usually so.

With Barbara Gaines’ Chicago Shakespeare Theater’s season-opening production, Washington D.C. actor Wallace Acton plays Richard with such affectations and disinterest that we don’t feel a thing. From the first moments of Richard’s soliloquy “Now is the winter of our discontent,” Acton is up there talking to himself, not us, refusing to connect either with the audience nor anyone else in the play.  At one point after revealing his plans, he offers a brief, cursory faux smile to the thin air. His faux British accent is a cross between Charles Laughton and Roddy McDowall impressions and makes Richard into such a detached dandy that we cannot possibly accept that he would be able to sway anyone in the court into his confidence to do his bidding, let alone that he would be able to woo his way into the bedchamber of Lady Anne. Without a Richard that works, the play falls apart and much of the rest of the cast just falls into standby mode, the women most effectively able to get their characters across despite such a handicap.

Not helping matters is that Gaines is unable to exhibit any vision of this play whatsoever, raising the obvious question of why do Shakespeare’s most-performed play at all if you have nothing new to say with it?  Save for Richard’s coronation and the final scene, there is no scenery, the pseudo-period costumes are mostly gray, foggy mist is pumped out the entire evening. Cliché-filled rock music blasts our way in and out of scenes, a loud clanking sound effect is heard whenever another victim gets it or Richard makes a decree. The climactic battle is the usual COT much-ado-about-nothing choreography of characters running up and down aisles to loud noises and bright blinking lights, i.e., mere adrenaline for its own sake.

We come dangerously close to an interesting concept during Richard’s nightmare sequence where a walled mirror is dropped down, suggesting that the ghosts to follow might be a manifestation of Richard’s own guilty conscience, but the literalism of the ghost scene makes such an implication unlikely.  (Dennis Polkow)