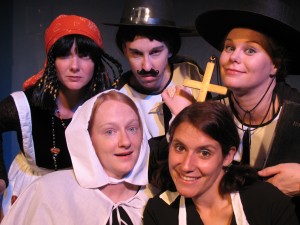 In 1692 in Salem, Massachusetts, bored little girls accused their neighbors of witchcraft; twenty people lost their lives. Not exactly fertile comic ground, but the Annoyance warps historical record with a feminist twist and makes it work in “Salem! The Musical.”

The writing can be spotty; the second act is abrupt and this crew doesn’t need a gratuitous cuss word to land a punch line. But the smart ensemble’s high-energy, varied approaches win over the audience: Van Kurin is a cross between Jimmy Swaggart and Elvis, Thornton is wry and sly, and Alltop leads with her pelvis. Dan Wessels’ score is in on the joke. It’s a sharp rewrite of a  scary story. (Lisa Buscani)