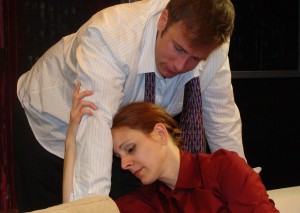 He is one of the presumed missing.  One of the presumed dead.  This is their meal ticket, he says.  They can leave without a trace—an idea his lover finds both alluring and repellent.  Over the course of ninety minutes, they will jab and joust as they debate their options.

It was only last year that I think I finally understood for the first time where LaBute is coming from as a playwright.  “In a Dark Dark House” was the play that did it for me, where the odiousness of the story revealed something deft and complex about human nature and the way we deal with our problems.

“The Mercy Seat” precedes that play by a number of years (it was first staged in 2002), and it features some of that same old repetitive LaButian jazz that can be such a turnoff—the play is essentially a fight repeated over and over again, though LaBute is witty as hell as he cuts these people down to size.

Ben (Darrell W. Cox) is the low-key lover to Abby (Cheryl Graeff), who also happens to be his boss, though he is quick to parse the definition: “I hold a position that supports you,” he clarifies. “I do not work under you.”  She is judgmental and petulant; he is worn out and looking for a restart button. Who is the bigger douchebag in this fight?  It’s a particular LaButian talent that you can never fully decide for sure.

Abby is gunning for Ben, a weird dynamic that brings to mind the bickering on vintage episodes of “Jon & Kate Plus 8.” She can’t ease up, no matter what: “That was a test, by the way,” she says at one point, “to see if you had a decent bone in your fucking body.” No matter how legitimate or irrational her points, every line out of her mouth ends on a sour button.

Directed by Joe Jahraus for Profiles, the production is both tantalizing and deeply unsatisfying. Cox has to portray a man who is not manful—“Be liked, get by, that’s me”—and there is considerable subtlety to his performance.  “Of course we’ll rebound,” he says, referring to the terrorist attacks, because that’s the American way: “Spending and eating and screwing our women harder than anyone else.” It takes the tiniest of facial expressions to convey a complicated person beneath that mellow, selfish exterior, and in the close proximity of the theater, you see every flinch on Cox’s face.

Graeff’s performance doesn’t work quite as well, and some of this is the way the role was written. Ben calls her an “over-dominating cunt,” and it’s as if Jahraus has taken those words as stage direction. Graeff plays her as a completely unattractive woman—not a bad choice, by the way—but she is at level ten from the get-go, which is not the same as conveying a woman on edge.  (Nina Metz)