by Monica Westin
October 5, 2009Filed under: 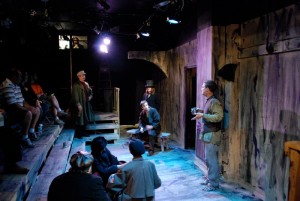 An almost-but-not-quite successful (and admittedly impressively ambitious) adaptation of the epic Dostoyevsky novel “Demons,” Bruised Orange’s production tries hard to overcome but can’t manage to avoid the built-in problem of overwhelming amounts of narrative, which ultimately drowns out much of the show’s theatricality. A number of gestures at metatheater and the show’s tone of hysteria tempered with melancholy help keep the dramatic pitch, but there’s simply too much detail needed for the audience to keep up, and it breaks up and stiffens what would otherwise be exciting scenes of a Russian town falling apart.  Even in the climax of the play, in which a society benefit is interrupted by anarchists’ bombs, there’s more speech-making and explanation than action; the overall experience is of one long series of exposition broken up by anarchist speeches, boozing, fighting and general Russian self-destruction. That said, the ensemble works valiantly to stay buoyant, and a few performances (Ross and Sonneville in particular) transcend the cumbersome narrative. (Monica Westin)