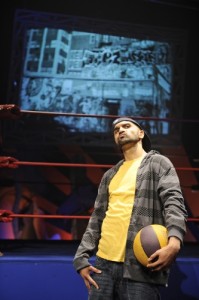 Professional wrestling is theater—a label I’m sure its many adherents would dismiss—but playwright Kristoffer Diaz has singled out this quality amidst the pomp and brawn and exuberantly insane energy and wrassled it to the mat.  Yeah, motherfuckers.

Victory Gardens has had an iffy track record with play selection in recent years (“Blackbird” being a notable exception). And yet, holy crap: This show is at Victory Gardens.  Stop and think about that for a moment.  Cast member Usman Ally says the same thing in his blog: “Subscribers better hold onto their oxygen tanks and their hearing aids, and everyone else better hold onto their asses!”  No kidding.

A world premiere, the production is a hugely successful collaboration with Teatro Vista, and director Edward Torres has done something very interesting here.  The play has the bones of a storefront show, but Torres hasn’t lost his mind working with Victory Gardens’ comparatively sizable budget.  Don’t get me wrong, this thing looks good—and no doubt it cost a pretty penny.  The production wouldn’t work without major style and flash (the design team has done a bang-up job, and the use of video here is canny), but Torres has found a way to retain the play’s smart-alecky, big thumping heart within the flash and outrageousness of its staging.

What you get is a vivid world fueled by hip-hop and a slap of testosterone.  Smart and comically astute, the play tackles everything from racial stereotypes to the business of show—tossing off blatantly offensive clichés, and then allowing its lead character to call them out with a simple, “Really?”  (The play is getting a slew of productions, by the way—it opens in Philly later this month and in Minneapolis in the spring.)

The world champ is Chad Deity (Kamal Angelo Bolden, winningly unpredictable and looking like a grinning, long-lost cousin to Mr. T), a guy both stupid and savvy—which is what every professional wrestler needs to be.  But our narrator is Macedonio Guerra—known as “Mace” in the ring—a Puerto Rican kid from the Bronx who works as a jobber in the ring.

He’s the villainous punching bag, wink, wink, there to make the other guys look good, and actor Desmin Borges plays the role with an intense, goofy, boyish devotion and charm.  Borges stares out with those basset hound eyes and half-smile, and the fix is in—in all the right ways.  All he wants is to tell “a perfect goddamn story”—one of communion and personal codes and metaphoric importance.  The man has a work ethic, one that he respects even within the bizarro world of pro wrestling.

When he spies a charismatic, long-and-lanky dude playing basketball in the park—a jabbering “Indian fucking rock star who can talk trash to you in English, Spanish, Hindi and Urdu,” played by the aforementioned and hugely talented Usman Ally—Mace knows he’s found the next great wrestling character.  It comes as no surprise that the promoter (a Vince McMahon-type played by James Krag, just noxious and oblivious enough) will devise the most offensive storyline imaginable for this “jingo-patriot mindless entertainment” where brown skin equals terrorist.

The play is incredibly well-written, with lines that frequently and hilariously sound as if they were pulled from a fortune cookie.  “In wrestling, you can’t kick a guy’s ass without the help of the guy whose ass you’re kicking.”  And, “The shot that knocks you out is the one you never see coming.”

When does the artifice become real?  That’s a nice metaphoric theme for Mace to chew over, but Diaz knows he has to bring it where wrestling is concerned, and there is actual hand-to-hand combat that opens the second act, though the play downplays the toll that pro wrestling takes on the body, no matter how choreographed the stunts.

Opening night there looked to be a bona fide shiner on the left eye of actor Christian Litke as he growled his way through the crowd.  Sure enough, the guy was nailed in the face by Ally during rehearsal.  Litke has real WWE credits to back up that beefy physique, but even so: “I kicked again and I heard a cracking sound,” Ally wrote on his blog.  “He ate it, hit the floor.  BOOM. I mean, I could feel something in his eye pop when I made contact.”  Orbital blowout.  But so worth it.  (Nina Metz)