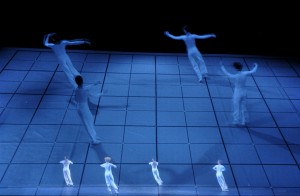 Having been born around the time of its premiere, watching excerpts from the revival of Lucinda Childs’ famous work “DANCE” is, to me, distinctly reminiscent of a particular aesthetic moment, like a haunting and beautiful and inscrutable dream riddled with flashed images from childhood. A black grid divides a white floor into squares. Dancers in modest, minimal white step briskly from one end of the stage to the other, traveling with half and three-quarter turns, taking light, low, buoyant leaps, crossing endlessly to the circular lilt of Philip Glass’ spinning score. Though rendered nearly anonymous by the uniformity of their costuming and choreography, the dancers, carried by momentum, betraying no effort in their ceaseless entrances and exits, seem at play—with their own lateral kinetic energy and with dancers projected on a transparent scrim at the front of the stage, who are dressed identically and dance in synch. There is a distinctive mix of geometry and playfulness in “DANCE,” like a chapter out of a Lewis Carroll novel: within the rigid confines of the meter, there is complexity and delight.

The video, by visual artist Sol LeWitt, was originally projected over the same dancers that appear the film including Ms. Childs, who says she does not interact with the material differently now than she did thirty years ago. “The film is there, there’s not much leeway,” she says. “And when I revive a piece I don’t make changes.” But now that the bodies on the stage have changed, the miniscule deviations between the live performers and ghostly figures—projected at times on a massive scale—lend “DANCE” an additional layer of dreamlike otherworldliness. The film has been transferred from 35mm to digital format for the thirtieth anniversary of the collaboration between Childs, Glass and LeWitt and was intended to coincide with a revival of “Einstein on the Beach,” an opera by Glass with choreography by Childs, which has been postponed. Of the engagement at the MCA this weekend, Childs says, “We’re thrilled to come because we haven’t done much touring in the States. We’re very happy about being able to come with this piece.” (Sharon Hoyer)