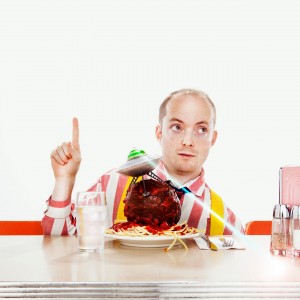 There are two things that come to my mind when someone says “mime.”  The first is Marcel Marceau, who is probably the person that most Americans think of despite the fact that very few of us ever had the chance to see the late (reportedly great) French mime artist during his lifetime. And then I think of “Tootsie, ” that delicious 1982 comedy in which a dejected Dustin Hoffman, strolling through Central Park, pauses to observe a mime balancing on a curb and then cruelly tips him over, a gesture that probably represents most people’s attitude towards mime artists.

But after experiencing the one-man mime show, “Magical Exploding Boy” presented under the auspices of Chicago Physical Theater, I will now think of Dean Evans. With nothing more than a bare stage, chair and a few props, this professional actor, mime artist and clown, who has worked extensively with the Neo-Futurists and (quite impressively) studied with Marceau himself, holds your rapt attention—no exaggeration here—for fifty-five minutes straight, and ultimately delivers one of the most unique, enjoyable and physically accomplished entertainments to be seen in Chicago right now.

With a marvelous musical score and an eclectic soundtrack that runs the gamut from Bossa Nova to old-time American to metal, the evening consists of straight mime, sound-effects laden physical bits that reminded me of the comedian Michael Winslow of “Police Academy” fame, glorious dance and a curious amalgam of all these styles that I will wholly attribute to Mr. Evans’ fertile—and sometimes twisted—imagination. There were times, especially during the evening’s final section entitled “Space.Lab.2030.” where I felt like I was watching a classical dance performance.  Indeed, Mr. Evans’ greatest gift—besides being able to make audiences laugh with the smallest facial gesture—is his sense of and command over his entire body, at once capable of contracting into itself like a modern dancer versed in Graham technique, or directing a limb into midair with the graceful deliberateness of a member of some corps de ballet. And when this nimbleness combines with his playful sense of humor, an ability to make a fool out of himself for sure, he launches into some superb dance sequences that make it clear this supple song and dance man could have had a wonderful career in vaudeville.

I’ll admit that some of the storylines he was trying to communicate outside of the musical staging confounded me at times, but the various themes of “The Bully and the Boy” (a nightmarish take on the “Chucky” movies perhaps) and “The Organism that Dies But Then Didn’t” hit me emotionally as well as physically, even if the former was more through laughs than tears. But based on the merits of this performance, it doesn’t seem like there’s much Mr. Evans cannot do—with this body or mind—if he tried it.  And you can bet I’ll be at his next solo show waiting to see what that is.

It would not be hyperbole to say that with “Magical Exploding Boy,” Mr. Evans delivers no less than a stunning tour de force. (Fabrizio O. Almeida)