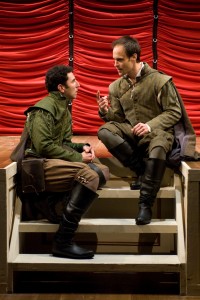 Tom Stoppard’s 1966 “Rosencrantz and Guildenstern are Dead, ” his first hit play, is so chock full of language and irony that as long as you have two actors with chemistry, it can virtually stage itself. A topsy-turvy view of Shakespeare’s “Hamlet” where the tragic tale of the Danish prince is perceived from the perspective of two minor and virtually interchangeable characters, the work is a favorite of theater cognoscenti in large part because the better you know “Hamlet,” the more enjoyable the piece becomes. (The reverse is more problematic since, for better or worse, “Hamlet” can never be experienced in quite the same way after having gone through Stoppard’s antics.)  Essentially, this is a riff on “The play’s the thing,” coined by Hamlet in the original, although ironically never explicitly said in Stoppard’s version. The dependence of Stoppard on Shakespeare often leads to a tongue-in-cheek approach where the characters are playing with the audience and each other with such narcissistic appreciation of the cleverness of what they are uttering that the work becomes dangerously self-aware.

Kudos to Writers’ Theatre artistic director Michael Halberstam for a staging that refreshingly recognizes that, particularly in a space as intimate as Writers Theatre, this play becomes a far more authentic experience and much funnier when the characters are not in on the joke that we, the audience, complete by our mere presence. Rosencrantz and Guildenstern—played by Sean Fortunato and Timothy Edward Kane, respectively—have no life whatsoever off stage (and page) and the confusion as to what they are doing in Hamlet’s world is precisely because Shakespeare had created them merely as minor stepping stones to drive his plot.  (Actor-director Michael Pennington jokes in his “Hamlet: A User’s Guide” that if Shakespeare were writing “Hamlet” today, a rewrite to a single character would be asked for to reduce costs.) The only thing revealed by the Bard is that they were classmates of Hamlet and that they end up doing the King’s bidding rather than Hamlet’s only because the King gets to them first. When the line that forms the title of Stoppard’s play is said at the end of “Hamlet,” it is merely a cue to the audience that Hamlet has outsmarted his royal uncle at the lethal expense of his manipulated friends.

In Halberstam’s hands, the three worlds of (1) Hamlet, (2) the Players (led by Allen Gilmore) and (3) Rosencrantz and Guildenstern are clearly delineated rather than the usual approach of having all three be constantly tongue-in-cheek. The “Hamlet” that is sketched out in this production is taken quite seriously, and it makes you want to see the same cast actually do a full-blown “Hamlet.” The Players fully recognize here that an audience’s appreciation is their very lifeblood and will do anything to entertain R & G—and us—but get their best shot when Hamlet comes up with the idea of having them present a play that will indict his royal uncle.  These worlds being so carefully and credibly drawn makes the bewilderment of R & G as to exactly how they fit in to all of this all the more poignant and all the more funny at the same time.  (Dennis Polkow)