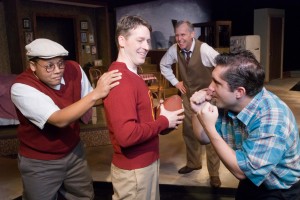 Sixty years after its premiere, Arthur Miller’s “Death of a Salesman” continues to echo as a powerful reminder of the dark side of the American Dream. The two paths it represents—getting by on peer approval and likeability or on studying and hard work—remain permanent options. The bitterness and confusion that Willy Loman experiences when confronted with the truth that both he and his onetime star-high-school-athlete son who his future hopes become pinned on after his own fall apart are failures is something we have all witnessed to one degree or another, whether up close or from a distance. How many of us have headed to a high-school reunion only to find out that the most popular folks of yesteryear are today’s lost souls, but that the nerds that were constantly picked on are now CEOs?

Decades before American capitalism came to the brink of the cliff last year, Miller raised fundamental questions in this play that seem more relevant today than ever before. The true crisis behind the work is what does it mean to sell something when there is nothing to sell?  Enron, Madoff, the mortgage crisis are all cases of smoke and mirrors with nothing in the long run but a charming lie, the American Dream being sold like snake oil by effective pitchmen who in reality, were selling nothing more than themselves.  It is the inevitable shadowy underbelly of money equals access and attention.

Director Michael Menendian is attentive to all of these themes in Raven Theatre’s elaborate production opening its twenty-seventh season; when Willy (Chuck Spencer) returns home at the opening of the play after we shown a video montage (by Mike Tutaj) of his drive home, he opens the garage doors to pull out an elaborate set design (by Andrei Onegin) that includes all of the bedrooms and kitchen of the Loman household.  The design of Raven’s space is perfect for Willy’s hallucinations from the past as they can come from any corner of the theater to immense effect.  Less effective—and in fact, often downright distracting—is the synthesized “After School Special”-like muzak that is often blasting away right in the middle of some of the play’s most eloquent soliloquies.

But the heart of a good “Salesman” are the principals, and Spencer brings a delightfully “Everyman” quality to Willy that fleshes him out wonderfully well. This is indeed a likeable Willy who has sadly bought into a colossal misperception of what life is all about, not just a crabby old man as he is often portrayed.  Casting two young actors in the roles of Happy (Greg Caldwell) and especially Biff (Jason Huysman), the son upon which so much of the play hinges, was a master stroke, as these guys really make you believe you are watching teenagers in the flashbacks yet Huysman’s contemporary Biff has a post-trauma melancholy to him stemming from the confrontation with Willy that, in this production, will break your heart when he comes to learn just how full of hot air his Dad really is.  (Dennis Polkow)

Yes! What a GREAT play. 60 years after, it still holds a pensive echo and powerful reminder of Arthur Miller. You are wrong about the Muzak comment though. The score has LIVE music played with guitar and drums throughout and is worthy of more than your ear gave it in your review. Of course it was written on Pro Tools in this age-the score is 100% original and would be worthy of an orchestra!