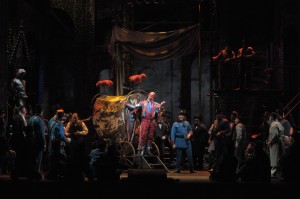 It used to be that Gounod’s “Faust” was the most popular opera in the entire repertoire, bar none. It was “Faust” that opened the old Met in 1883—in Italian, no less—and its popularity was such that a performance of the work opened nearly every opera season, every year.  It was Gounod’s “Faust” around which Gaston Leroux set his “Phantom of the Opera,” and the 1925 Lon Chaney film version actually included entire scenes from the opera. Indeed, when speaking of his twelve years spent as a music critic, George Bernard Shaw used to joke that ten of those were spent listening to “Faust.” Even in Germany, where Goethe’s “Faust” is a religion all of its own, the opera has always been popular, though so unfavorably compared to Goethe that German-speaking countries often presented the opera as “Marguerite” in deference to the German poet.

At Lyric Opera, “Faust” has always been popular, and even as it became less performed in other houses, Lyric kept the “Faust” tradition burning brightly. Bass Samuel Ramey was Lyric’s Méphistophélès of choice for well over two decades and, in fact, Ramey became so associated with the role that virtually any operatic demon at Lyric became his exclusive property. With Ramey as its star and the constant popularity of the opera, often other roles and elements of “Faust” bleakly suffered, and in fact, Lyric has yet to present a complete performance of the work, still shamefully cutting half of its last act containing some of the piece’s best music, right to this day. Another casualty of Lyric’s troubled past with the work is the immensely desolate and gray production of the work that the company still uses, although the last time around, some colorful costumes, additional props and special effects were added to attempt to counterbalance its drabness.

This time around, the singing is so uncharacteristically glorious that cuts and drab scenery are minor quips. Polish tenor Piotr Beczala has made Faust his signature role, and from the moment he opens his mouth in dreary despair in his study, it is easy to hear why. The voice is clear, flexible and carries beautifully, even in a cavernous house such as the Civic Opera House. Although German bass René Pape’s Méphistophélès does not carry as well, he more than compensates with his variety of vocal color; he can be demonic when needed, such as with his frenzied salutation to the Golden Calf, but his invocation to the night that first brings Faust and Marguerite together is luxuriously luminous in its beauty. Puerto Rican-born soprano Ana María-Martínez is a wonderful Marguerite and, at long last, every note and trill that the character sings is transparent and discernable.  Baritone Lucas Meachem’s Valentin makes us shiver when he curses his sister as he is dying, and Ryan Center mezzo soprano Katherine Lerner makes a viable Siébel.  Even the ensembles, so often a casualty of poor balances of voices, come off gloriously.  (Dennis Polkow)