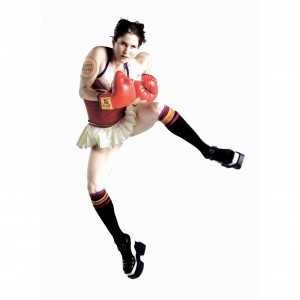 In an uncommonly lucid analysis of plagiarism and influence published in Harper’s Magazine a couple of years ago, Jonathan Lethem mades the case that appropriation and originality are indelibly fused in the creation of art. The balance of the former to the latter is often the subject of heated debate, especially when copyrights (read: money) is involved. Artists tend to be fiercely protective of their work and rightfully so; the creative product is their cultural and, to a fortunate few, economic currency. By the same token, acute awareness, frequently to the point of paralysis—what Harold Bloom fetchingly labeled the Anxiety of Influence—of one’s creative predecessors is the cumbersome bag of inspiration that comes with the informed creation of literature, music, plastic arts and, since the advent of video, dance.

“Within the course of this project, I’m starting to think everything is derivative,” Rhoads says. “And I’m starting to see sampling as a specific art form that is really challenging.” In this project, Rhoads and the Lucky Plush crew sample everything that catches their fancy—high art, low art and in between. “I don’t think a single person in the audience will understand all the references, but I feel like it’s okay,” Rhoads says. “It’s similar to what we all do in everyday life when we’re online, getting emails from friends, surfing YouTube and we’re constantly taking in bits and pieces of things that inspire us; we don’t know where those things came from, but we’re synthesizing them in a new context. And that’s what we’re doing in this show.”

It could be argued that Internet 2.0 has increased the glut of source material swimming around our conscious and unconsiousnesses while proportionally decreasing a sense of obligation to those sources. The blogger is not accountable for his research—not in any material way, beyond the virtual public forum of online response anyhow—and the YouTuber may release their responses, parodies and re-creations of other videos into the strata unencumbered by prerequisite skill, purpose or forethought. In discussing the YouTube phenomenon Rhoads says, “Here’s a socially sanctioned mechanism that supports appropriation with response video: make your own version. Which is the next response video that’s going to go viral? We’re in this internet culture and there’s a generation of people who don’t see the importance of recognizing your place in a lineage.”

This word, lineage, comes up in our conversation time and again. “I think the coolest thing about this project for me has been to think about contextualizing myself in a lineage that is a huge web with all these crazy intersections,” Rhoads says. “When I go back and try to remember physical movement samples of past works that I did with other choreographers I can see so clearly the lineage of my movement aesthetic.”

One element of the Punk Yankees project, and one of the most fascinating pages on stealthisdance.com, is a series of video lineage trees, in which one dancer of the company remembers a movement phrase by a different choreographer and teaches it to another dancer, who re-choreographs it in her own personal style and then shows it to the first dancer who, in turn, does an impersonation of the second dancer’s reworked choreography and, finally, teaches that impersonation to the second dancer. Heady stuff, but such is the nature of following the creative umbilical cord; one doesn’t find a terminal pater familias, but an ever-expanding network of mentors, models and antagonists. As Lethem says, “invention, it must be humbly admitted, does not consist in creating out of void but out of chaos.”

In suggesting a title for this article, I almost inadvertently cribbed Lethem’s title for his Harper’s essay: “The Ecstasy of Influence.” Having read the essay when it was first published, that catchy and referential title wormed its way into my unconsciousness and re-emerged at the subject of appropriation, convincing me it was a product of my own originality. Had I not returned to the article—now archived and immediately accessible thanks to the Internet—to quote it, Mr. Lethem’s turn of phrase would sit atop this text without credit to its original author. A close shave with plagiarism that would most likely have, unnoticed, passed quietly by.