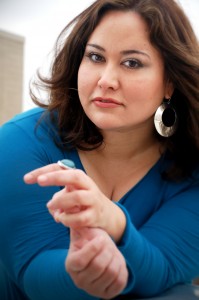 Writer, performer, artistic director and—given her new show at the Steppenwolf Theatre—adaptor Tanya Saracho would like you to know she’s on “hiatus.” And yet, after spending just a few minutes with this vivacious 33-year-old life force, I wonder just what she’s on hiatus from.

This interview almost doesn’t happen. Everyone seems to want a piece of Saracho this weekend, and I’m lucky to get an hour with her on the day of the premiere of “The House on Mango Street,” the play she has adapted from the book of the same name by novelist Sandra Cisneros. And so it is 2pm on Saturday—an hour before the press performance—and we’re whisked away to a conference room on a lower floor by David Rosenberg, the Steppenwolf’s indefatigable publicist who, travelling down the stairwell, skillfully yet gently asks Tanya if she will condescend to a phone interview with another journalist on Monday. “The day of the Jeffs,” inquires an alarmed Saracho, who will be up for three Jeff Awards that evening and who has just picked up a dress for the occasion (“Nordstrom” she had told me earlier, as if on the red carpet).  When at last we get to talking, and she rattles off her projects in her rapid-fire Span-English-hybrid lingo (something that has become a trademark of the dialogue in her plays), it’s a vertiginous experience:  along with “Mango” she has been revising and restaging “Lunatica(s)” for its November 18 premiere at Chicago Dramatists, where the show is scheduled to run for an ambitious three months (“we’re going to trust that Latinos want to see it for three months”).  She’s workshopping a new piece about queerness, culture and race—in collaboration with About Face Theater—for next year’s Latino Theatre Festival at the Goodman. She’s single-handedly heading Teatro Luna, the ten-year old company she founded with former co-Artistic Director Coya Paz, and working on a strategic plan. She has a draft due in January for an adaptation of Chekhov’s “Cherry Orchard” for Teatro Vista (“I have to go away for a week and finish since everyone knows more about Chekhov than I do”).  And although Saracho could not confirm exactly the circumstances under which she may be working on the book of a new musical, she does tell me it’s about “hookers at the turn of the century.”  I’m subsequently serenaded with a few bars from the opening number to “Pippin,” a show she did in high school when she was a real musical-theater geek.

I’m sorry, but did someone say something about being on hiatus?

“My Señora [the Mexican truth teller Saracho visits weekly for spiritual cleansing and protection] said I would not be avancando [progressing in her career] unless I cleared my palate for a little bit.  So nada de alcol [no booze], nada de hombres [no boys] and eat better!  That’s why I’ve given myself this hiatus from little pleasures.”

Think what you may about Saracho’s wholehearted belief in Mexican psychics, but you have to admit this young woman has one hell of a charmed career right now. “I don’t submit plays, I don’t seek out work, but it’s come to me.  Everything has been an accident.”  She quietly whispers this last part to me, almost nervously, as if at any moment someone will walk through the door and inform Saracho that the jig is up.  This may also explain why she’s rubbing a thick bracelet on her left wrist that on closer inspection spells DREAM in large block letters.  (I am soon told that at home she has three more that spell HOPE, LOVE and LUCKY.)

Lucky could indeed describe Saracho’s journey to “Mango Street,” if she hadn’t clearly earned the gig—as anyone who’s followed her career can attest—through sheer talent. But for the record, around 2004 Saracho and Sandra Delgado (an actress starring in “Mango”) were rehearsing a play together at the Goodman, and it was Delgado who encouraged Saracho to submit her work to Goodman’s then-Literary Manager, which Saracho did but only after getting over some professional shyness (“I was content with my work for Luna at the time,” she admits). A week later, she is awarded a five-thousand-dollar prize that allows her to write this year’s Jeff-nominated “Our Lady of the Underpass”, but more importantly lands her on the radars of then-Steppenwolf Director of New Play Development Ed Sobel, and “Mango” director Hallie Gordon, also Artistic and Educational Director of Steppenwolf for Young Adults. It was Gordon who had been interested in first commissioning Saracho to adapt a theatrical version of former gang member Reymundo Sanchez’ “My Bloody Life,” his autobiographical account of life as a member of the Chicago Latin Kings. “Now why would I do that?  What does a Mexican rich girl who didn’t grow up in this country know about their stories?”  She begins laughing at herself.  “I was going to do this Greek chorus of Cholos!” (For the uninformed, the Urban Dictionary defines cholos as “a term implying a Hispanic male that typically dresses in khaki pants, a wifebeater sleeveless t-shirt and a hairnet.”)  “And then we met some Latin Kings and they informed us that we did not have the support of the Nation to do this play.  And Hallie was like ‘the what?’”  Saracho leans in closely to deliver the next bit, as if there’s danger of a drive-by shooting on Halsted if someone hears her.  “Hallie, the Latin King Nation, he means don’t do this play!  I was like I’m not doing this play!  I needed a protective spell [from Saracho’s señora] after that!”

And so it was a rejection by these Kings that led Gordon and Saracho to work with Latin royalty of a different kind, the eminent Cisneros and “The House on Mango Street,” her coming-of-age story of a young Latina growing up in Chicago in the late 1970s.  When I tell Saracho that this theme—one the playwright has explored in her work from the smallest Teatro Luna monologue to the full-length “Kita Y Fernanda”—reminds me of something the late Jewish novelist and feminist Grace Paley once said, about a writer finding their themes at a young age and then exploring them the rest of their life, Saracho pauses for a moment.  “I could see how that could make sense. I’m like stuck in adolescence. I feel like that age leaves so many scars and then you spend the rest of your life putting cocoa butter on them.”  Before she gets too sentimental she adds, “I’m going to be that 50-year-old mujer showing inappropriate cleavage and wearing glitter, I know I am.  They’re going to say, that playwright’s too old!”

For now, this playwright’s just too busy, and I wonder how long Chicago can contain this incandescent talent.  “I do want my plays to go out of Chicago, and I want to go [outside Chicago] for projects, but this feels like home. I don’t want to leave,” Saracho says stubbornly.  “My Señora says, ‘Oh, you’re leaving.’  She’s not very clear when, but she says I’m leaving.”

Let’s hope her Señora’s prediction is off on this one.