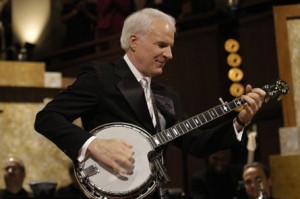 Man, I wish I could be so wildly successful at comedy that when I’m 64, I can say, “You know, I’m tired of stand-up. I think I’ll go on a banjo/bluegrass tour,” and only not can I embark on such a tour as specifically quirky as the banjo-picking kind, but I can go play freaking Carnegie Hall. Such is the state of Steve Martin’s career as he rolls into town with the acoustic bluegrass quintet Steep Canyon Rangers. Martin’s been plucking away since the seventies, but back then the banjo was usually a prop to his zany, whimsical stand-up. These days, Martin has made it clear that bluegrass is a serious artform and ambition for him, but that will surely not keep the former Three Amigo/Father of the bride/Sgt. Bilko from throwing in a bunch of jokes in between songs (can “King Tut” be performed bluegrass?). As for his banjo skills, Martin’s no chump, making him one of the few performers who can cross into another medium and not embarrass themselves, which a pretty impressive feat, at least until Paul McCartney takes a stab at a stand-up career. (Andy Seifert)