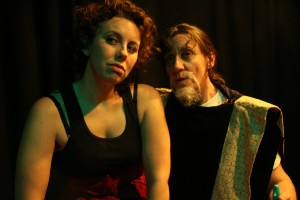 Theo Ubique’s revival of the 1960s musical “Man of La Mancha” isn’t the subtlest of productions. It’s bold, brash, in-your-face and boasting the kind of dark psychological acuteness of acting and emotional commitment by actors often relegated to straight drama. It’s been beautifully directed by David Heimann, his debut here in Chicago, imaginatively staged by choreographer Maggie Portman—I am continually and happily surprised at how creative these folks are with such an unforgiving space—and powerfully designed by Carrie Colden, who has transformed the charming No Exit Café into a claustrophobic, garish looking and puke-green tiled asylum holding cell. Clearly, there is a concept to embrace here and nobody in this production is letting go.

Original book writer Dale Wasserman’s device for condensing one of Spanish literature’s greatest seventeenth-century novels—Cervantes’ “Don Quixote”—was to imagine Cervantes, who had once been arrested and spent time in prison, as a gifted and inspirational raconteur who reenacts his story behind bars to the delight of his fellow prisoners, thus capturing the spirit of the original novel (hope and optimism) in spite of the soul-crushing confines. Since Heimann has set his production in what appears to be a maximum-security mental hospital, the lines between reality and illusion, to cope in a mad world or escape from it, are further blurred. The production is also very queer, with effeminate male turns, cross dressing and Sapphic overtones. And while I don’t think Heimann is making a statement on gender politics, it makes the evening—conceptually, at least—feel like a cross between “Life is Beautiful” and “Paris is Burning,”  albeit set to music.

Which leads me to the most unsatisfying aspect of this otherwise admirable, conceptually strong and darkly entertaining evening of musical theater, and it’s a biggie—the music. Well, not all of the music. The four-piece band sounds tight and strong, with flutist Chris Skrable really shining in Mitch Leigh’s lovely sounding score, and the large ensemble numbers show off musical director Ethan Deppe’s good work blending the vocally mixed bag of strong-looking ensemble types. But it’s Danielle Brothers in the title role (yes, Danielle is female) who is paid the biggest disservice by this production. I wouldn’t say she’s miscast because a woman in the role works—it’s textually supported and makes for some tongue-in-cheek textual moments. But the part, musically, was written for a baritone male voice, and Ms. Brothers—I believe—is an alto. If you’ve heard Ms. Brothers sing before, you know she has the vocal chops to send musical shivers down your spine, but you wouldn’t know it from this. On the show’s big anthems especially, she sounded hoarse, thin in the lower passages and was threatened at times to be drowned out by the band—disconcerting given that she’s no more than ten feet away. Couldn’t they have transposed the songs like they did for Linda Eder when she belted the hell out of the number for a PBS concert you can hear and watch on YouTube? Or musically worked “The Impossible Dream” so that Ms. Brothers could sing the hell out of it like Dame Shirley Bassey did when she recorded the number (yes, it’s also on YouTube).  And if the score has been adapted to suit Ms. Brothers’ musical talents, then my ears were taking the night off.

Be it a “Man” or “Mujer” of the Mancha, what was ultimately needed here was anyone who would bring the house down vocally, and provide us with some good old-fashioned musical payoff. (Fabrizio O. Almeida)