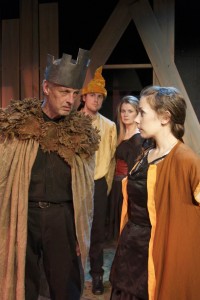 Profoundly weak on all fronts, this adaptation of the much-loved cartoon and novel by Peter S. Beagle loyally follows the fairy-tale journey of a unicorn in search of her kind, but the show creates no momentum or magic of its own. Everything about the “The Last Unicorn” feels amateurish. Art direction, with an endless falling-flower-petal motif, halfhearted medieval costumes and a harpie in a velvet unitard, is cheap and trite. Acting is wildly uneven, somehow both uncontrolled and stilted (the songs are worse). The pacing, however, is what keeps the story from ever getting off the ground, glacially slow with overwrought, overexplained scenes that destroy any sense of tension and excitement. The play, adapted by Ed Rutherford, aims for playful, with some punning and clever one-liners, but they fall flat under his own direction. One senses an underlying lack of control about the whole production; scenes combine dragging, stilted exchanges with sudden chaotic fights and sprints offstage. And when a troupe of unicorns—signified by actors wearing half-togas over black pants—come leaping out of the ocean (a yard of purple fabric) and pirouette in the air, it’s hard to muster the suspension of disbelief needed to feel any fairy tale magic. (Monica Westin)

I disagree 100%. I am not a lifelong fan of the novel or the movie although I have appreciated the story. This play, on the other hand, has touched me and my soul. I feel that it is incredibly beautiful. The simple nature of the costumes and set require you to use your imagination and while doing so may take effort, it is well worth it. The actors are all excellent and tell such an amazing story about mortality and the beauty of it. True, this type of show may not be for everyone, but I highly recommend it and… Read more »

Very fair review. The production looked cheap. The script was too long. I nearly fell asleep in the 2nd act. Frankly the show didn’t make me care about the story. You could tell the actors were all trying really hard, but sometimes that isn’t enough.

Hi. I am Peter S. Beagle’s business manager. I just wanted to post here that Peter and I were at the premiere and second-day matinee, and we both enjoyed this show very much. We’ve seen plenty of stage versions of THE LAST UNICORN over the years, but this was by far the most imaginative. Was it perfect? Definitely not. But we were impressed with everyone’s work and would very much like to see how much farther this approach might eventually be taken.