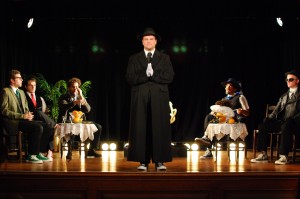 A dynamic, quirky, and often hilarious production that mostly overcomes major problems in writing. G.K. Chesterton’s gorgeously off-kilter, mysterious novel involves a conspiracy of a secret anarchists’ council, where the inner circle of men are named after days of the week and may or may not be working for Scotland Yard or the devil himself. In contrast to such uncertain subterfuges, Bilal Dardai’s adaptation is heavy-handed at best, and he’s added far too many scenes of exposition and explanation that detract from the beautiful peculiarity and mystery, not to mention incredible rhetoric of paranoia, of the story. In contrast, Jessica Hutchinson’s directing is hip, astute and  responsive, with a semi-promenade that makes brilliant use of space and has actors circulating amongst the audience without any sense of clumsy attempts at “interactivity.” Acting is deft across the board, and the quicksilver pacing, along with gorgeous technical theater, keeps the play afloat—even the facile last scene Dardai added that makes a vapid reference to terrorism (not to mention completely compromises Chesterton’s message) remains buoyant in the hands of director and cast. (Monica Westin)