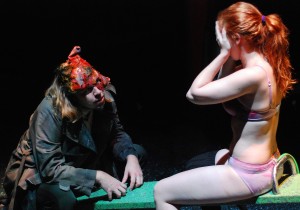 A colorful but unsubstantial adaptation of “Frankenstein” that ultimately feels derivative both of the novel/Karloff film and the Hypocrites’ previous work. In a Newcity interview earlier this fall, Sean Graney expressed his intention to piece the show together out of  various “dead material” from previous adaptations, but in this skeletal version, much of the story is lost and the show itself is what feels dead. With bloody dolls hanging from the ceiling, creepy suicides in wedding dresses, and the Hypocrites’ aggressive promenade style, the show is visually appealing (though you have to work to see the cast much of the time—the MCA space feels cramped, and the actors moved around out of my view more than half the time no matter how hard I tried to keep up). Acting is energetic but often  inconsistent and even uncontrolled, and the schizophrenic mood—horror and screaming with tacked-on modern one-liners like a running joke about canned cheese—keep the show from building up real dramatic momentum. The bottom line is that while their treatment of “Oedipus” breathed new life into the play last spring, the Hypocrites and Graney make a mistake in believing that they need to make “Frankenstein” colorful, edgy, and modern to make it interesting. I found myself more often than not simply watching the black-and-white Karloff film, projected behind the stage, and finding it more moving than the anxious, histrionic postmodernism in front. (Monica Westin)