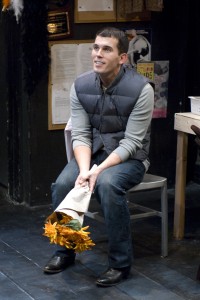 Obie award-winning playwright Adam Bock’s latest work attempts to examine the effects of isolationism on the gay community. Instead, he creates a stew of implausibility and half-formed argument.

The Flowers acting troupe is a “created” family of actors and tech staff who fight so hard you’d think they were related. Bock has obviously spent time in the theater yet has no idea how one is run; his dramatization creates so many questions, the mind boggles. What Chicago theater company cancels one production and mounts Shakespeare the next night? How do either of the plays-within-the-play comment on the issues at hand? Was the fifteen-minute snippet of “Romeo and Juliet” necessary?

The ensemble does what it can with the material. Bruch Reed is vulnerable and stretched; Kieran Kredell shows a wide, believable range. But the best performances can’t salvage a piece that tries to say so much and fails to say it. (Lisa Buscani)