by Brian Hieggelke
October 31, 2009Filed under: 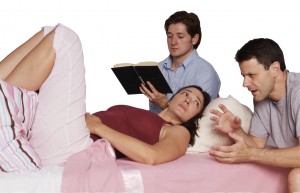 With a commanding performance by its title character, “Lucinda’s Bed” may offer one of the finest star turns ever by an inanimate object. Playwright Mia McCullough cleverly tells a woman’s tale by setting every scene in and around her bed: it’s where the dreams and prayers of childhood unfold, where the mischief of sexual awakening unfurls, where a marriage and family are cradled, where betrayal is contemplated, where betrayal is covered up. It’s a place of birth, a place of death. How could a mere actor compete with such gravitas?

A teen Lucinda prays to an absent god but meets the monster under her bed. He’s not scary, though, but embodied by a devilishly seductive Lucas Neff, who plays the monster (in all his incarnations) with a charismatic understated cool. In this world premiere late in its run at Chicago Dramatists, director Jessi D. Hill hustles us through the life of Lucinda, played with earnest vigor by Elizabeth Laidlaw, keeping the pace so crackling that we don’t think much about how empty her life really is, until Lucinda realizes it herself late in the play. She mates with Adam, a safe, “good” choice, emasculation personified both on the page and in the players. Doug MacKechnie personifies him with the kind of sniffling sensitivity reminscent of Alan Alda or the fictional Felix Unger, while casting makes this an Odd Couple of another sort—he is literally diminutive in relation to the larger physical stature of Laidlaw. As their life follows a rather predictable arc—child-bearing, nesting, philandering—her monster becomes her guardian devil, both looking out for Lucinda and serving as her temptation.

Through it all, the bed commands center stage. When Lucinda takes a mate it expands, both metaphorically and literally, in a brilliant bit of stagecraft executed by set designer Grant Sabin, who’s transformed the tiny black box of this space into a nifty and stylish bedroom that shifts and morphs with seeming ease to convey the passing stages of life.

McCullough navigates this Bobo milieu with comfort, using facile wit to disguise a dismal world view. Early on, Lucinda constructs a rigid moral code of being “good” for its own sake, and then spends her life letting that code ruin it. But she talks better code than she shows it: “good” for her is almost a childlike notion, standing for chastity and fidelity and little else. Surprisingly, McCullough conveys an old-fashioned idea about women; Lucinda’s life is completely defined by men and how she relates to them. When she is betrayed, she is permanently destroyed.

For some, bed can be a sanctuary, where even the worst days must end, often to be reborn the next morning with a fresh hopeful start. But Lucinda’s bed is an altar, where life’s “great moments” transpire and, ultimately, a prison she tries to flee. Yet this clever conceit of McCullough’s traps the play in its own device when the characters we are watching fail to develop with any depth. In spite of the valiant exertions of the ensemble, Lucinda is something of a cipher; Adam moreso. The monster of Lucinda’s imagination seems just as real as his maker, which is less a compliment to the latter than a complaint about the former.

To love this play, you have to fall in love with Lucinda. After all, you go to bed with her for most of her life. But she’s more of a one-night-stand than a soulmate; ultimately, you see her pain but do not feel it. (Brian Hieggelke)