by Monica Westin
November 2, 2009Filed under: 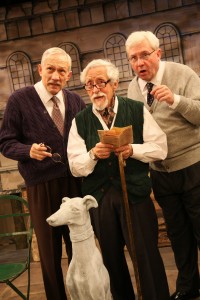 The antidote to overdone appeals to emotions, this understated and unexpectedly touching show stays with you like a rock in your shoe. The scope of Gerard Siblyeras’ play is deceptively slight: examining the subtly changing relationships between three WWI veterans, divided by class and all suffering physical or emotional damage from the war, who sit on the terrace of a nursing home in late 1950’s France. At heart it’s simply a character study showcasing the talents of its elegant trio of actors. David Darlow is particularly effective as cynical, wounded Gustav. Tom Stoppard translated the play, and it shows, as the friends’ dialogue transitions smoothly and naturally between bawdiness and poignancy. The best exchanges are pure poetry, without any melodrama or rhetorical flourishes; but it’s the humane comedy in between, created by each man’s neuroses and ability to push the others’ buttons, that fuels the honesty of the production and reflection after. (Monica Westin)