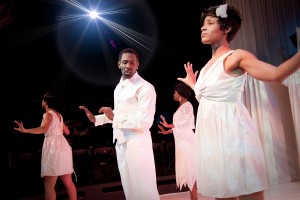 I don’t think I’ve experienced such audience adulation for a jukebox musical since the opening night of “Mamma Mia!” on Broadway eight years ago. That show, which premiered only weeks after 9/11, caressed the badly bruised souls of New Yorkers everywhere, and owes part of its initial Broadway success to having been the ultimate theatrical comfort food. Spiritual healing, however, with an added shot of R&B flavored “sensual” healing, seems to be the driving force behind Jackie Taylor’s newest production at her Black Ensemble Theater, “The Message is in the Music (God is a Black Man Named Ricky).” It’s formulaic, for sure. And it’s got the problems that beset even the best of the jukebox genre musicals (and that could keep an unemployed dramaturg working): a skimpy plot; shallow characterizations; not always dramatically motivated vocal histrionics; contrived means by which random songs are inserted here and there. But who cares about “dramaturgy” when a show undeniably raises the roof as this one does, connects to its audience on an emotional and spiritual level and features some of the finest singing and dancing to be seen on a Chicago musical stage right now. What we have with this “Message” is a musical and theatrical “Chicken Soup for the Soul”—no more, no less and with no further aspirations than to find the message, not to mention the movement, in the music. On those terms, it unquestionably delivers.

As far as the story goes, it’s the oldest one in the book (good versus evil, faith and optimism in the light of brutal reality and temptation) set to a rousing selection of popular songs, but what a catalog of songs they are! Given the subject matter, I could see how such hits as “Heaven Must Be Like This,” “Devil in Disguise,”  “Bridge Over Troubled Water” and “Let it Be” could be jammed into the storyline.  But how “Ain’t Nobody,” “My First, My Last, My Everything” and especially “I Feel Love”—the Pete Bellotte/Donna Summer/Giorgio Moroder synthesized masterpiece that inspired many a popper-fueled gay disco experiences in 1977—would be used was beyond me. But Ms. Taylor squeezes them in, and sometimes with delightful aplomb.

Speaking of a rousing message, as a gay person of color I feel I must pay kudos to Ms. Taylor for the following, whether intentional or not. God (He) is holding his She—I love that Taylor has given the savior hints of carnal sensuality—and tells her that “Every ‘He’ must have a ‘She’.”  To which She answers, “Or whatever floats your boat. Every heart must be nourished.” To have such a message of beautiful inclusion, and to walk the talk of this musical’s message that love is love no matter what the gender, especially to a demographic that continues to struggle with the reconciliation of homosexuality and religion, is nothing less than revolutionary.

It’s hard not to discuss the show in broad brushstrokes, if only because its forceful mix of sexiness, soul and musical energy is what hits you like a Mack truck, but that’s not to say that there isn’t greatness in the details. Costumes are topnotch, especially a second-act one-piece jumpsuit (for two of the ladies) in purple, fuchsia and white that looks like something Bob Mackie would have designed for Liza Minnelli back in her variety-show days. The musical staging and choreography, by Rueben Echoles, is nothing short of exhilarating, using recognizable sixties dance tropes (the jerk, the pony, Gospel claps, a little Ladies’ Latin) in a fresh new way. Why I have not heard of Mr. Echoles before is beyond me, but any troupe wanting to inject movement into their work should ring BET immediately and book this guy. Of the dancing ladies, the performer known as Carrie reminds me of an old-school Bob Fosse dancer, all legs and hips melting into sensual movement bliss. Of the singers, Rhonda Preston has lungs of steel and the kind of breath control that would make Patti LaBelle jealous.  Dawn Bless reminded me of a young Deniece Williams with her angelic-sounding voice (even if someone else gets to sing “Free,” Ms. Williams’ signature number from the seventies). Trinity Murdoch came closest to delivering the vocal fireworks while staying in character, and Rick Stone, who stars as God (He), has a silky falsetto that caresses the ear throughout. Finally, I haven’t enjoyed playful bickering between God and the Devil—as is featured in Ms. Taylor’s light book—since “Randy Newman’s Faust” in the late 1990s.

While exiting the theater, I wasn’t surprised to hear the praise coming from pleased patrons. But when one young lady said to her companion, in reference to BET, “They deserve recognition,” I could only think to myself, “Amen to that.” (Fabrizio O. Almeida)