by Dennis Polkow
November 3, 2009Filed under: 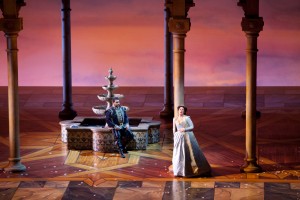 Giuseppe Verdi’s “Ernani,” an early work that is rarely performed, is being heard for only the second time in Lyric Opera’s fifty-five year history, the last time having been some twenty-five years ago. Based on the Victor Hugo play “Hernani” that is set during the Spanish Renaissance, the play caused a sensation in its day but is ironically now as much remembered for having inspired Verdi to write an opera around it. Hugo’s original and convoluted plot was so reduced and reworked to its bare bones in Verdi’s opera that Hugo was understandably furious. Indeed, its tedious plot and the fact that Verdi’s music often has little to do with what is being dramatically conveyed make it an occasional undertaking for only the most Italianate-obsessed of opera companies. Why then recommend it?  Because unlike the most popular works of Verdi that so often sell themselves at Lyric that the company can often get away with assembling second-rate casts, “Ernani” is such a tough sell that you need a sterling cast to make it succeed. (The 1984 production did not succeed on any level.)

In fact, in the case of this production, the offstage drama threatened to upstage the onstage drama in that soprano Sondra Radvanovsky, arguably the greatest Verdi soprano currently singing, was appearing with a five-pound cast on one leg from an encounter with a mugger and a broken toe on the other from a passionate tenor having accidentally kneeled on it during a San Francisco performance of “Il Trovatore.” She moved and was costumed in such a manner that the opening-night audience barely noticed the difference, but unlike hypochondriac divas who might cancel due to a sniffle, Radvanovsky pressed on and sounded no worse for the wear. Her voice is one of the few that is not only gorgeous, but can carry across even a cavernous opera house such as the Civic Opera House, nearly three times the size of a standard European opera house.

With Radvanovsky being such a trooper, was Italian tenor Salvatore Licitra, Ernani himself, going to cancel because of a sinus affection that noticeably affected his vocal timbre on opening night? Happily not, although he did press Lyric general manager William Mason to ask for audience indulgence before Act II; ironically, nothing was ever communicated about Radvanovsky’s condition.  When Licitra’s infection passes, their duets should be something stellar and, as it was, they were still damn impressive opening night, especially under the circumstances. Also sounding glorious was Italian bass Giacomo Prestia making his Lyric debut as Silva and Italian conductor Renato Palumbo brought a true Verdi sound to the Lyric Opera Orchestra and chorus. (Dennis Polkow)