by Andy Seifert
November 9, 2009Filed under: 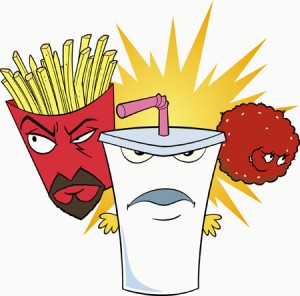 Here’s a surprising fact: we’re coming up on the nine-year anniversary of Aqua Teen Hunger Force’s first episode (which, appropriately, was shown unannounced at 5am). That’s nine years of a series comprised of three talking fast-food items, their hairy, masturbation-loving neighbor, a bizarre cast of supervillians and a lot of nonsensical yelling. I’m not sure how any sober person can watch more than one fifteen-minute episode at a time of ATHF’s unrestricted insanity and often plotless shenanigans, but I’ll admit that the show (and this goes for anything on Adult Swim) can be pretty damn hilarious when in you’re in certain moods, especially any kind of stupor. The live show, featuring show co-creators Dave Willis and Dana Snyder, promises to include unseen clips from the show, script readings, and live music (?), so hardcore fans of the show and anyone who can handle at least an hour of unmitigated absurdity should feel right at home. (Andy Seifert)